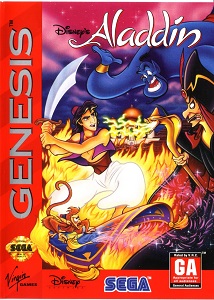 Disney’s Aladdin is a platform video game developed by Virgin Games and published by Sega for the Sega Genesis. Based on the 1992 animated movie of the same name the game is one of several games based on the film. Another game based on the movie was released the same month for the Super Nintendo which was developed by Capcom and is a completely different game.