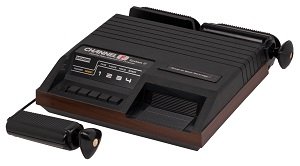 Fairchild Channel F is a second-generation home video game console designed by Fairchild Semiconductor in conjunction with Alpex Computer Corporation. The system launched in November 1976 and was the first home console of the second generation. The Channel F introduced the interchangeable cartridge that contained ROM chips that could be plugged into the base unit, a first in the video game industry and was a monumental step forward for the industry.