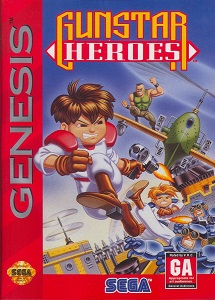 Gunstar Heroes is a run and gun video game developed by Treasure and published by Sega in 1993 for the Sega Genesis / Mega Drive. Development of the game began in 1991 by staff at Konami however the company did not see the potential in the concept of the game. Konami’s unwillingness to embrace their staff’s original ideas lead to a group of individuals leaving in 1992 to form their own company, Treasure.