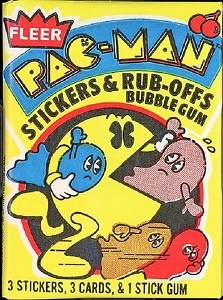 In 1980 Fleer released a trading card set based on Namco’s hit arcade game Pac-Man. It is the first trading card set to be themed after a video game. The set consists of 54 cards containing stickers that could be peeled off and a scratch-off game card.

Video City is a set of trading cards based on several arcade video games that were produced by Topps. The set released in 1983 and consisted of 32 cards in total, 28 sticker cards and 4 scratch-off game cards. The cards centered around four popular arcade games of the time: Donkey Kong Jr., Frogger, Turbo and Zaxxon. Topps initially provided retailers with sales sheets to advertise the trading card set that mentioned Q-Bert and Centipede as being included in the set however neither were featured in the final release. 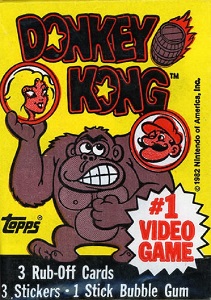 In 1982 Topps released a trading card set based on Nintendo’s hit arcade game Donkey Kong. The set consisted of 32 cards containing stickers that could be peeled off and 4 different scratch-off game cards. On the opposite side of the 32 sticker cards contained a portion of a picture that can be used to create a large Donkey Kong picture by collecting and combining cards.