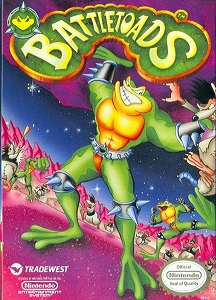 Battletoads is a platform beat ‘em up video game developed by Rare and published by Tradewest for the Nintendo Entertainment System and later ported to various other consoles. Based on the adventures of three humanoid toad warriors who form a group known as the Battletoads, the game is the first installment in the Battletoads series.