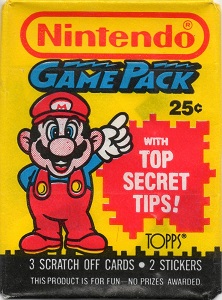 Nintendo Game Pack is a set of trading cards based on several Nintendo Entertainment System games that were produced by Topps in the United States and O-Pee-Chee in Canada. The set released in 1989 and consisted of 93 cards in total, 60 scratch-off game cards and 33 stickers with top secret tips on the opposite side.