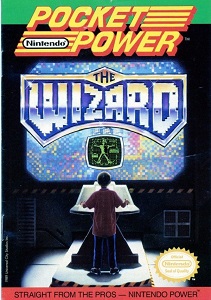 Pocket Power was a Nintendo magazine created for the release of the 1989 film “The Wizard”. The Wizard starring Fred Savage was a movie that heavily revolved around video games, in particular Nintendo products. The movie follows a boy and his brother who run away from home and hitchhike cross country with the help of a girl they meet along the way to compete in the ultimate video game championship, Video Armageddon for a grand prize of $50,000.