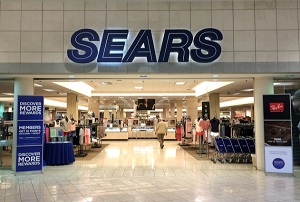 Sears was an international retailer that was founded in 1893 in Chicago, Illinois. The American department store chain was founded by Richard Warren Sears and Alvah Curtis Roebuck under the name Sears, Roebuck and Co. who established a new mail-order service. They began to diversify their product lines offered in their catalogs and by 1984, the Sears catalog had grown to 322 pages, including many new items such as sewing machines, bicycles, sporting goods and automobiles.