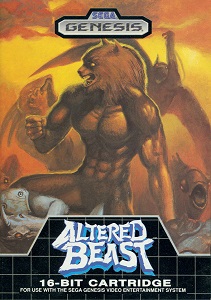 Altered Beast is an action beat ‘em up arcade video game developed by Sega R&D1 and published by Sega in 1988 for the System 16 arcade hardware. It is the first game in the Altered Beast series and was quickly ported to the Sega Genesis by Sega’s R&D2 team. Sega wanted to boost sales for their new home console and strengthen their market share in order to get a head start in the 16-bit home console race over Nintendo. They did this by offering arcade ports that were extremely close in graphical quality as the arcade version of the game. Sega decided to use Altered Beast to showcase the power of their new home console the Sega Genesis and bundled it as a pack-in game in North America.