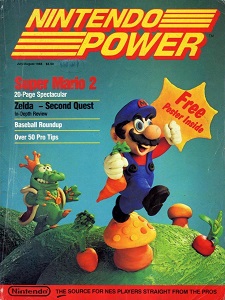 Nintendo Power is a video game magazine that was published monthly by Nintendo to cover news, previews, reviews and in depth look at games released for Nintendo platforms as well as upcoming Nintendo consoles and accessories. The first issue of Nintendo Power was released in 1988, covering content from both July and August of 1988. Nintendo distributed the magazine as an annual subscription service as well as to retailers to sell individually to non-subscribers.