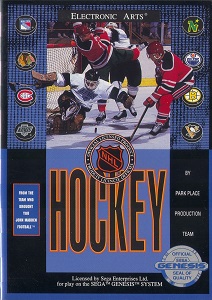 NHL Hockey is an ice hockey video game developed by Park Place Productions and published by EA Sports. The game released in August 1991 for the Sega Genesis under the title NHL Hockey in North America and released for the Sega Mega Drive in Europe and Japan under the title EA Hockey. The game became massively popular warranting a sequel and spawned an annual franchise for Electronic Arts, making it the first game in the NHL series.