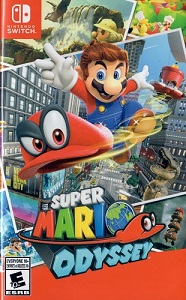 Super Mario Odyssey is an action-adventure platforming video game developed by Nintendo EPD in collaboration with 1-UP Studio and published by Nintendo for the Nintendo Switch. Released on October 27, 2017 the game is seen by many as a return to form for the Super Mario series. The game implements open ended, exploration-based gameplay featured in Super Mario 64 and Super Mario Sunshine, moving away from the linear gameplay of prior entries in the series since the release of Super Mario Sunshine for the GameCube.