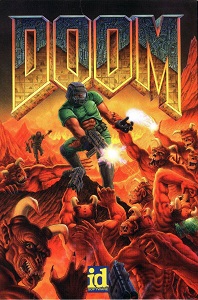 Doom is a first-person shooter video game developed and published by id Software for the PC. It is the first installment in the Doom series and is considered one of the pioneers for the first-person shooter genre. Gamers assume the role of a space marine, fighting his way through hordes of invading demons from Hell. The Union Aerospace Corporation has been experimenting with teleportation technology on Mars’ moons Phobos and Deimos. After early success, something goes wrong. It seems the scientists have opened a gateway straight to Hell. Phobos base is overrun with demonic creatures, and Deimos as a whole simply vanishes. A squad of marines is sent to Phobos, but all except one are quickly slaughtered. It falls to the surviving marine to grab some guns and strike back at the demons.