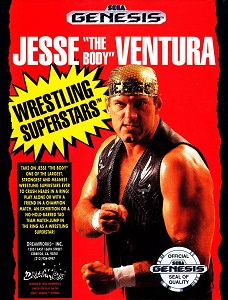 Jesse “The Body” Ventura Wrestling Superstars is an unreleased Sega Genesis video game that was planned for release in North American in 1992 but never came to fruition. Developed by Human, the team behind the popular Fire Pro Wrestling series, the game was a North American localization of their fourth Fire Pro wrestling game which released for the Sega Mega Drive in Japan.