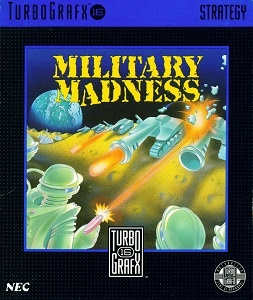 Military Madness is a turn-based strategy game developed by Hudson Soft for the TurboGrafx-16. Published by Hudson Soft in Japan the game was originally released on February 9, 1989 for the PC Engine under the name Nectaris. The title was renamed to Military Madness when publisher NEC released a North American version of the game for the TurboGrafx-16.