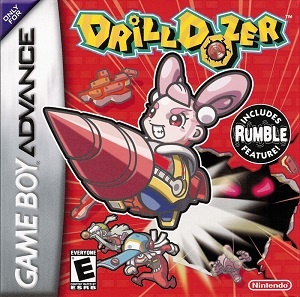 Drill Dozer is a platform video game developed by Game Freak and published by Nintendo for the Game Boy Advance. The game first released in Japan in 2005 and was localized for a North American release by Nintendo of America’s Treehouse division. When the game released in North America in 2006 it was one of two Game Boy Advance games to incorporate force feedback by including a rumble feature.