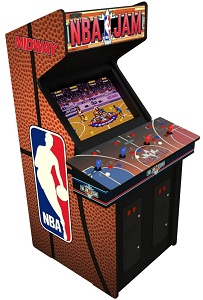 NBA Jam is an over the top 2-on-2 basketball arcade game developed and published by Midway. Released in arcades in 1993, the game became the first entry in the NBA Jam series, a series that transcended beyond typical sports games and appealed to a wide audience and not just sports fans.