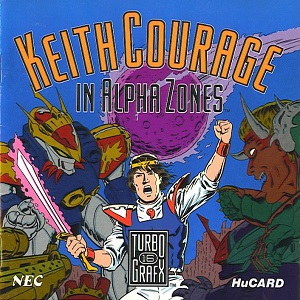 Keith Courage in Alpha Zone is a science fantasy action platformer developed by Advance Communication Company and published by NEC for the TurboGrafx-16. The game originally released in Japan as Mashin Eiyūden Wataru in 1988 for the PC Engine and was an adaptation of the anime television series of the same name, Spirit Hero Wataru.