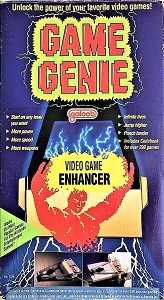 The Game Genie is a line of video game hardware devices that allow consumers to manipulate their games with the use of game codes. Created by Codemasters, the hardware device was designed to attach to an existing cartridge then plug into the corresponding system to allow for gameplay manipulation. Models were created for the Nintendo Entertainment System, Sega Genesis, Super Nintendo, Game Boy and Game Gear. The devices were marketed and distributed by the toy manufacture Galoob in the United States and Camerica throughout Canada. 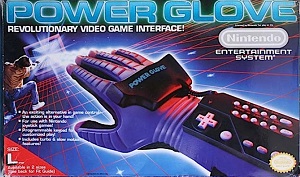 The Power Glove is a motion gesture controller accessory for the Nintendo Entertainment System that was manufactured and distributed by Mattel in 1989. It was the first virtual reality technology that was commercialised and released as a consumer product.