The World of Nintendo was a merchandise marketing program that Nintendo rolled out to major retailers to standardize how Nintendo products were being marketed and sold in retail outlets and department stores.   The program featured a store within a store design which carried official Nintendo merchandise.

The purpose of the program was to push Nintendo branded merchandise as Nintendo already established a strong foothold in the video game industry during the mid 1980s.   Their video game hardware and software were already extremely popular, and the company was in the process of branching out to animated cartoons, breakfast cereals and various merchandise.  Wanting to capitalize on the momentum of their video game popularity the World of Nintendo was design to market Nintendo branded toys, board games, backpacks, t-shirts, school supplies, plush toys and hats along with many other various items.

The program launched throughout North America in 1989 and within one year over 80 retailers entered into an agreement with Nintendo to setup Nintendo dedicated sections within their stores to sell official Nintendo merchandise.  The retailers that agreed to the program varied in size from smaller specialty stores to major department stores.  By 1990 over 5,000 stores converted portions of their retail space to World of Nintendo branded areas to market Nintendo specific merchandise.

Nintendo launched an extensive retail campaign in 1989 to bring retailers on board with their vision of setting up dedicated standardized World of Nintendo branded spaces within stores.   As part of their campaign, they released marketing videos, marketing brochures and an in-depth buyers guide targeted to attract retailers to sign up for their marketing program.  As part of their marketing material, they cover the resurgence of the video game industry from the crash of 1983 and the sales growth between 1985 and 1988.   They cover the sales growth of the industry over the 4-year period and stress how Nintendo was the leader within the space accounting for 75% of sales in 1988. 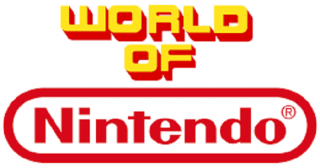 As part of the program Nintendo established “NES Merchandising Inc.”, a subsidiary of Nintendo that was dedicated to the marketing program and to working with retailers.  NES Merchandising Inc consisted of a team of 135 merchandising professionals that would work directly with retailers to streamline their setups and educate their staff to increase sales.  By tracking sales information and consumer behavior their goal was to create the best product mix for each store based on geographical data and store layout.

Nintendo morphed into a juggernaut in the late 1980s, reaching sales of $2.7 billion in 1989.  The video game industry as a whole reached sales of $3.4 billion in 1989 and Nintendo accounted for 80% of the market share.  Nintendo promoted that their merchandise program would attract customers to their stores and while consumers were purchasing Nintendo merchandise, they would also be likely to continue to shop in other portions of their store to boost overall sales.  Retailers did not want to miss out on capitalizing on the popularity of the Nintendo brand and agreed to Nintendo’s merchandise marketing program.

Nintendo convinced retailers such as Sears and Toys “R” Us to feature multiple aisles of Nintendo merchandise in a store within a store setup branded “World of Nintendo”.   The marketing program and brand continued throughout the early 1990s reaching over 10,000 retail outlets.  During the peak of the Nintendo Entertainment System era, one in every five dollars spent in a Toys “R” Us was on a Nintendo product.

Nintendo discontinued the marketing program in the early 1990s however signs, fixtures, and display cases with the brand “World of Nintendo” remained in stores well past the end of the program.  When each retail store went through renovations the presence of the World of Nintendo brand began to fade over time until it was completely replaced.  The brand was revived in 2014 and is used to promote the Nintendo line of toys produced by Jakks Pacific.  Since its introduction, hundreds of products have been produced featuring characters from Nintendo’s Super Mario Bros, The Legend of Zelda, Donkey Kong and Metroid franchises.