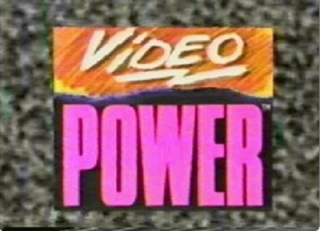 Video Power was a television show that was co-produced by Bohbot Entertainment and Saban Entertainment. The show aired for two seasons from 1990 until 1992 and changed formats between seasons.

The first season of Video Power consisted of both a live-action segment that covered video games news, reviews, tips, and a cartoon segment called “The Power Team” that was produced by Acclaim Entertainment. The show was hosted by Johnny Arcade who covered the live-action segments of the show. Johnny Arcade would open the show by skateboarding onto the set and providing an introduction. The show would start off by typically covering a review of a featured video game before moving into the cartoon segment.

The main feature of the show was a 15-minute cartoon called “The Power Team” covering the adventure of a team of heroes from different Nintendo Entertainment System and Game Boy games that were published by Acclaim. The five-video game characters that were featured in the cartoon segment were Max Force, a policeman from NARC, Kuros, the knight from Wizards and Warriors, Tyrone, a basketball player from Arch Rivals, Kwirk, a tomato from Kwirk and Bigfoot, a monster truck from Bigfoot. The heroes would face off against Mr. Big and his thugs, Joe Rockhead and Dr. Spike Rush from the NARC video game, while some episodes included Malkil from Wizards and Warriors joining forces with the NARC villains. 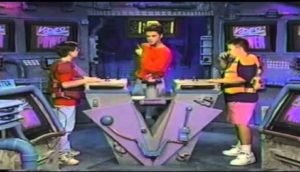 Another live action segment covered by the host Johnny Arcade would bookend the cartoon segment to wrap up the episode. The last segment known as “The Power Edge” provided hints and tips on popular games for gamers that were having trouble achieving certain task in games.

The second season of the show began airing in the fall of 1991 after undergoing a major overhaul. The new format of the show took on the form of a game show where kids got to show off their video game skills by competing against each other. Johnny Arcade remained the host of the show and was joined by a co-host named Terry Lee Torok as well as an in-house band led by Steve Treccase.

The show was taped in New York City at the famous Kaufman Astoria Studios, a historic movie studio located in the Astoria section of Queens. The studio was built in 1921 and was originally constructed for motion picture companies to have a facility close to the Broadway theater district. During the time of the taping of Video Power the studio was also being used to tape such shows as Sesame Street, Where in the World is Carmen Sandiego and The Cosby Show.

The new format of the show would kick off with Terry Lee Torok introducing Steve Treccase and host Johnny Arcade. Johnny Arcade would start the show with the “Video Power Edge” segment which was one of the only things that was retained from the original format of the first season of the show. After covering the tips and hints found in the “Video Power Edge” segment the show moved into a four round game show.

The first round known as “Johnny on the Spot” had Torok go into the studio audience to search for four contestants to ask Johnny video game related questions. Each contestant would ask Johnny one question and if they were able to stump him by the question then they would win a prize. After each contestant had a chance to ask Johnny a question, they would move from their seats in the audience to join Johnny on stage to compete in playing video games in the round known as “Power Play”.

The four players face off in an elimination round, where they were typically given 2 minutes and 2 seconds to play a preselected video game. At the end of the allotted time the two players with the highest score would advance to the next round. The two remaining players were provided a “Power Vest” and a “Power Helmet’ to wear which were covered with Velcro. Johnny Arcade would then proceed to ask the contestants video game trivia questions. The players were given the chance to buzz in to try and answer the questions correctly to obtain points.

Three questions were worth 10-points each, with one of the questions being an audio clip where the players had to identify the game based on the it’s in game music. The fourth question was with 20-points and mid-season a fifth question was added as a bonus where the contestants could win a video game if they were able to identify a game from a short video clip.

The two players would face off in one last round of “Power Play”, this time they were only provided 1 minute and 1 second to play try and obtain the highest score possible on the preselected video game. Whoever earned the highest score would receive 50 points for winning the round. The points over the last two rounds were calculated to determine the “Video Power Challenge” winner. If the score was tied, the person who had the highest score in the first “Power Play” round was declared the winner. 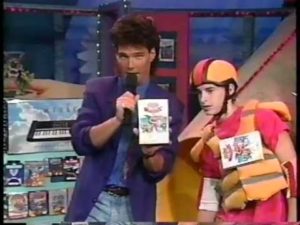 The winning contestant would move on to the prize round where they were given 41 seconds (originally 30 seconds) to run through the “Power Mall”, a maze filled with video games with Velcro strips taped to the back of the game box. The contestant would run through the maze grabbing video games along the way and sticking them to their “Power Vest” and “Power Helmet”. When the contestants reached the end of the maze, they would exit the maze through a giant tube slide. The contestants would keep all of the games that were stuck to their “Power Vest” and “Power Helmet” after completing the maze, if they were able to locate the “secret game” that was in the maze they would bring home a bonus prize.