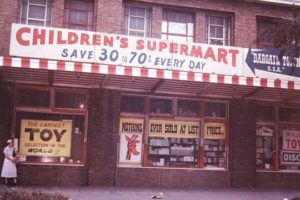 Toys “R” Us was an international retailer that was founded by Charles Lazarus in April of 1948 as the Children’s Supermart. Initially founded as a baby furniture store, Charles opened a store in Washington, D.C. as the demand for baby related items was at a modern day high due to the post-war baby boom. Lazarus decided to shift focus from furniture to toys and in June 1957 opened the first location to be branded Toys “R” Us in Rockville, Maryland.

The shift to focus on toys was a successful move by Lazarus as many popular brands started to gain popularity in the early 1960s such as Lego, Barbie, G.I. Joe and Hot Wheels to name a few. The company started to expand and gain notoriety in the early 1970s and started using its store mascot, Geoffrey the giraffe in TV campaigns but it wasn’t until the late 1970s before the company would see massive growth, eventually expanding internationally in September 1984.

The toy industry was completely reshaped in the 1970s and 1980s by newly emerging electronic toys, first by educational devices like Texas Instruments’ “Speak and Spell” and Milton Bradley’s memorization game “Simon”. With the rise in popularity of video games and the release of dedicated home consoles it seemed to be the next logical step for Toys “R” Us to adapt and start carrying video games. This was proven to be a smart move by the retailer as 1978 proved to be a banner year for the company thanks to the demand for electronic devices such as video games.

Between 1978 and 1983, Toys “R” Us dedicated full aisles to video games systems such as the Atari VCS, Intellivision and ColecoVision along side many home computers. The video game crash of 1983 resulted in the retailer scaling back the footprint that video games had in the store and placed heavy discounts on remaining stock. Even with the crash, video games still found a way to stay afloat and allowed for retailers to make small amounts of profit, resulting in the retailers dedicating a very small amount of shelf space for video games between 1984 and 1987. 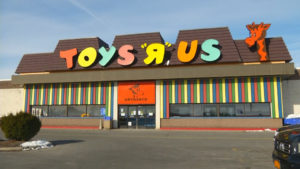 The success that the video game industry had on Toys “R” Us between 1978 and 1983 resulted in exponential growth through out the United States and positioned them well to expand internationally in 1984. During the years where video game sales dropped significantly the retailer continued to see great success as a result of the Cabbage Patch Kid and Teddy Ruxpin fads.

It wasn’t until the late 1980s before Toys “R” Us would reach the height of its cultural success. They would achieve this success with the help of the resurgence of the video game industry in 1987 but they were extremely hesitant to get involved with an industry that recently collapsed. Nintendo, a Japanese company who had seen recent success in Japan with the release of their Family Computer (Famicom) was looking to expand into the North American market. Having failed the previous year to secure a retail distributor, the team would handle the debut of the Nintendo Entertainment System themselves. 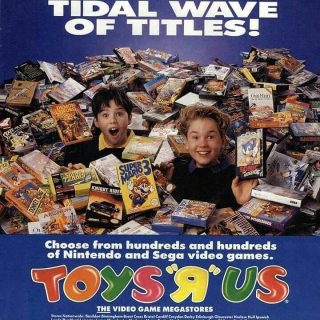 This began a series of limited test market launches before deciding to release the system nationwide. Nintendo selected New York city as their test market with a $50 million budget. In a huge gamble by Minoru Arakawa and without having informed the headquarters in Japan, Nintendo offered to handle all store setup and marketing, extend 90 days credit on the merchandise, and accept returns on all unsold inventory. Retailers would pay nothing upfront, and after 90 days would either pay for the merchandise or return it to Nintendo. At Nintendo’s unprecedented offer of risk absorption, retailers signed up one by one.

By 1987 Toys “R” Us was back fully onboard with full distribution of video games and providing plenty of retail shelf place for video game related products. Nintendo morphed into a juggernaut in the late 1980s, convincing Toys “R” Us to feature multiple aisles of Nintendo merchandise in a store within a store setup branded “World of Nintendo”. The “World of Nintendo” was not exclusive and went on to fill over 10,000 retail outlets. During the peak of the Nintendo Entertainment System era, one in every five dollars spent in a Toys “R” Us was on a Nintendo product.

The success of the Toys “R” Us and the video game industry went hand in hand, one massively helping the other. Neither would have seen the sheer success they achieved without the other. Toys “R” Us who went public in 1978, transformed from a $500 million toy retailer in 1950 into a $12 billion one by 1990. At the height of its success the retailer sold 18,000 different toys in 1,450 locations around the world and controlled 25 percent of the world’s toy market.

Obviously, there were other retailers that sold video games in the 80s and early 90s such as Babbages and Funcoland but none of them had the same mystique. There was something special about Toys “R” Us which made it the place to be for video games during this era. Their stores seemed to have the largest selection with aisles of games be represented with a picture of the box art and a corresponding pickup slip underneath. The slip contained the name of the game, its price and a barcode which customers would bring to a cashier to purchase. Once purchased the receipt could be brought to a locked room in the back of the electronic section to have another employee fetch the game that was purchase from a huge selection of games which was kept locked away. 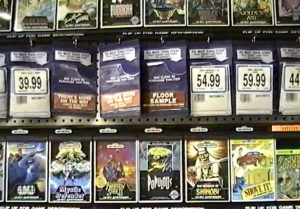 Toys “R” Us embodied the concept of toys and with that extended to video games. There was a magic to the experience of buying a game or just browsing the selection. Something that can not be replicated or relived much like the height of the arcade era or when Blockbuster rental stores were the standard way to rent movies and games. The experience is something many will look back on fondly and reminisce on what it was like to be a Toys “R” Us kid.