The Wizard is a movie that heavily revolves around video games that was released in theatres in North America on December 15, 1989.  Written by David Chisholm, the film follows a boy and his brother who run away from home and hitchhike cross country with the help of a girl they meet along the way to compete in the ultimate video game championship, Video Armageddon for a grand prize of $50,000.

The film received quite a bit of controversial reviews from critics when it released due to the sheer amount of Nintendo products in the movie and their importance in the plot of the movie.   The movie was labeled as a feature-length commercial for Universal Studios and Nintendo by many critics.

This was an understandable conclusion as the film was centered around competing in an ultimate video game championship and three months after the release of the movie Nintendo started to hold the 1990 Nintendo World Championships from March 8, 1990 to December 9, 1990 in 29 cities across the United States.  Aside from the obvious promotion of the upcoming Nintendo World Championships the movie features Nintendo arcade cabinets, home consoles, accessories, games and even the Nintendo Power Line as the lead characters in the movie calls the hotline to consult with a Nintendo Gameplay Counselor to get ready for the video game championship.

Nintendo went as far as to supply participating theatres with a special edition pocket sized version of their Nintendo Power magazine called “Pocket Power” for the movie.   The theatres distributed the magazine to the audience as they entered the theatre.  Pocket Power was a 40-page magazine in the likeness of Nintendo Power and covered the same type of topics.

The movie is well known for being the official introduction of Super Mario Bros. 3 in North America and was the final surprise game in the video game tournament at the end of the movie.  The film also features a very popular cameo of the Power Glove for the Nintendo Entertainment System as the lead antagonists demonstrates the peripheral while playing Rad Racer.  Along with these two well known appearances the following video games and hardware make appearances in the film.

Games Featured In The Movie

Starring Fred Savage in the role of Corey Woods sneaks his younger half-brother Jimmy out of a psychiatric hospital.   Jimmy, suffering from posttraumatic stress disorder (PTSD) after the death of his twin sister Jennifer two years earlier was committed to a psychiatric hospital by his mother and stepfather for help.  Shocked by this development, Corey sneaks Jimmy out and sets off cross-country for California.

Jimmy’s parents separated after the death of Jennifer and was living with his mother Christine and stepfather Mr. Bateman prior to being committed to a psychiatric hospital.   Jimmy’s half-brothers Cory and his older brother Nick lived with their father Sam after the separation.   When Jimmy’s parents learned of the situation Nick and Sam head out in search for the boys to bring them home while Christine and Mr. Bateman hire a private investigator to find Jimmy. 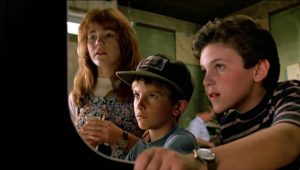 While at a bus station, Jimmy and Corey meet Haley Brooks, a teenager on her way home to Reno.  The bus station had an arcade machine which Jimmy was playing while Corey was trying to purchase bus tickets but did not have enough money.  When Corey returned to Jimmy, he noticed that he achieved an impressive score in Double Dragon.  Being short on money for the bus tickets Corey makes a bet with Haley that Jimmy could beat her at Double Dragon.  This is where they discover that Jimmy was immensely skilled at playing video games and Haley nicknames Jimmy “The Wizard”.

Haley informs Corey of a video game tournament called “Video Armageddon” being held in Universal Studios Hollywood, with a grand prize of $50,000.   Haley agrees to help take Jimmy to the tournament in return for a share of the winnings.  The trio hitchhike cross-country hustling people at arcades and gambling at a casino doing whatever it takes to get to their destination on time for the championship.

While in Reno Jimmy begins training on arcade machines with the help of the Nintendo Power Line to get prepared for the upcoming tournament.  When the trio finally arrive at their destination and entered the tournament, they discover that Lucas Barton a gamer they met along their travels was also in the tournament.  Lucas intimidated Jimmy with how good he was, his knowledge of a vast amount of games and brand-new hardware such as the Power Glove.

Jimmy and Lucas compete in the preliminary round in separate groups and do not have to directly compete against each other.   After playing Ninja Gaiden both Jimmy and Lucas advance to the finals along with a third contestant.   During the final round the host of Video Armageddon surprises the contestants by informing them that the final game is something brand new that has not been released yet, something that none of them would have played or have knowledge of.  The host reveals the game and it is Super Mario Bros. 3.  The contestants compete in a head to head battle for 15 minutes to see who can achieve the highest score.  After a heated battle that came down to the last seconds, Jimmy wins the tournament and earns the prize money.

The film was mildly successful in theatres earning $2,142,525 on it’s opening weekend and ending its theatrical run grossing $14,278,900.  The film was able to earn back the approximate $6 million investment that it cost to make the movie from the theatrical release alone, but the film was also able to gross another estimated $6 million in video rentals.

The movie has been released on VHS and LaserDisc on three separate occasions, in 1990, 1992 and in 1997.  It was first brought to DVD in Europe on February 2, 2001 and then in North America on August 22, 2006.  The Blu-ray version was released on May 15, 2018 and a special edition Blue-ray was released by Shout! Factory on March 24, 2020.  Despite receiving negative reviews from critics, the film has achieved a cult following over the years and is fondly remembered by many.