The SwordQuest Challenge was a video game contest held by Atari between 1982 and 1984.  The contest was centered around a new video game series that Atari was releasing for their home video game console, the Atari VCS.

The origin of the SwordQuest series was conceived by the Easter egg that was hidden and found in Atari’s previous video game “Adventure”.   Adventure drew a lot of public attention when the hidden Easter egg was found and documented which led Atari to capitalize on the idea of hiding messages within an action-adventure game.  By creating an action-adventure series where players had to find both in game clues and clues contained within the physical material bundled with the game provided Atari with an outstanding marketing opportunity.

Atari came up with the idea to create a contest based on finding the hidden messages within an action-adventure based video game while offering prizes in the form of treasures that would be found within a fantasy adventure game.  The prizes would consist of medieval style treasures made of gold, diamonds and other precious stones. 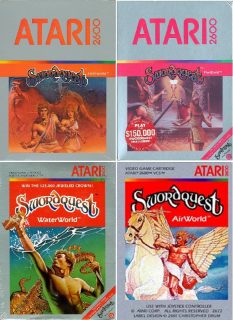 The contest was used to promote each of the games in development for the new video game series.  The series consisted of four action-adventure games, Earthworld, Fireworld, Waterworld and Airworld with each game having its own contest.  Each game came bundled with a comic book that explained the game’s plot and contained information required to solve the puzzle in order to win the corresponding contest.

Atari had planned five contests with a combined total value of $150,000.  Each of the four games in the series had a prize valued at $25,000 and the four winners of each contest would compete for the grand prize worth $50,000.  All of the prizes were extravagant, and Atari spared no expense in the marketing of the SwordQuest series, they even commissioned DC Comics to create the comic books that were included with each video game.  Each comic was written by Roy Thomas and Gerry Conway while the artwork was created by George Perez and Dick Giordano.

Each of the games in the SwordQuest series were themed after the elements, earth, fire, water and air.  The gameplay of each game required players to navigate through various rooms, collecting objects from each and placing them in other rooms.   When the object is placed in the correct room, the player would be presented with a numerical clue which referenced a page and panel within the comic book that was bundled with the game.  Within the corresponding panel players would find a hidden word that was part of the SwordQuest contest.   By submitting all of the hidden words in the correct order to Atari, players would be entered into the next phase of the contest.  Atari arranged to bring all winners of each contest to the Atari headquarters in Sunnyvale, California, to compete in a race to complete a customized programmed version of the game.   The first player to finish would be declared the winner of the contest and be awarded with a prize created by Franklin Mint. 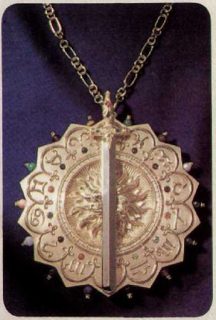 The first game in the series, Earthworld released in October 1982 with a contest prize of a talisman.  Known as The Talisman of Penultimate Truth, the elaborate prize consisted of a 18 karat gold disc studded with 12 diamonds and the birthstones of the 12 zodiac signs with a white gold sword mounted on the front of the medallion.

Approximately 500,000 copies of Earthworld were sold however only around 1 percent of the consumers submitted entries by the contest’s deadline of March 15, 1983. Of the 5,000 entries received by Atari only eight were answered correctly with the solution “Quest in tower talisman found”.   The eight contestants competed in a championship on May 2, 1983 at Atari’s headquarters in Sunnyvale, California for the $25,000 prize.   Each contestant was given the opportunity to play through a special edition championship version of the game with the fastest completion time winning the talisman.  The contest had a 90-minute time limit and was won by Steven Ball with a completion time of 46 minutes and 49 seconds.

A month prior to the submission deadline of the Earthworld contest Atari released the sequel in the SwordQuest series, Fireworld in February 1983.   Due to the publicity of the first contest Fireworld drew more attention resulting in more contest submissions.   A total of 73 correct submissions were received by the contest’s deadline of July 15, 1983 by Atari resulting in the need to limit the number of finalists to compete for the $25,000 prize, the “Chalice of Light”, a goblet made of platinum and gold studded with diamonds, rubies, sapphires, pearls and a green jade.

To narrow down the number of finalist Atari required the 73 finalists to write a brief essay of what they enjoyed about the game.   A panel of judges selected the top 50 responses to pick the finalists that would advance to the final competition that was held in January 1984.  All 50 contestants were flown to Atari’s headquarters to compete against each other in a special edition championship version of Fireworld.  Michael Rideout completed the game in the fastest time of 50 minutes winning the chalice worth $25,000.

By the time the second contest was completed Atari had suffered major financial setbacks due to the video game crash of 1983.   Atari was looking to cut financial losses and began the process of cancelling the SwordQuest Challenge contest.   Due to the fact that Atari already began advertising the availability of the third contest for Waterworld, Atari’s lawyers advised management to continue with the Waterworld contest.

Waterworld released in October 1983 however to limit the number of contest entries the game was only made available to members of the Atari Club.   The limited number of contest entries allowed Atari to save money on travel expenses by only flying a handful of finalists to Atari’s headquarters to compete in the championship for the $25,000 prize.  This time the prize was a crown known as the “Crown of Life” which was made of solid gold and decorated with diamonds, rubies, sapphires, and aquamarines.

In the midst of the contest period Atari was sold to Jack Tramiel, the owner of Commodore International in mid-1984.   As part of the acquisition Tramiel created a new company called Tramel Technology which the Atari division was incorporated into.   This transition complicated the organization and completion of the Waterworld contest.   The contest entry deadline was deferred from December 15, 1983 to April 15, 1984 to allow for additional time to reorganize the event.   Atari reduced the number of finalists to 15 from the previous 50 and it is believed the contest was never officially completed and the “Crown of Life” was never awarded to a winner.

Instead Atari chose to discontinue the remaining contest including the active Waterworld contest.  Over a lengthy period of time Atari worked with their legal team to come to an agreement with contestants on a settlement.   The approximate 15 Waterworld finalist were awarded $2,000 each while Steven Ball, winner of the Earthworld contest and Michael Rideout, winner of the Fireworld contest were awarded $15,000 each.  The Waterworld finalist were awarded the value of the “Crown of Life” prize divided by the number of finalists, while both Steven Ball and Michael Rideout were award a quarter of the value of the grand prize if the competition continued.

The fourth game in the series, Airworld was cancelled and was never released.   Marketing for the Airworld contest was completed prior to the game’s cancellation.   The prize for the contest was to be a “Philosopher’s Stone”, a large piece of white jade in an 18-karat gold box encrusted with emeralds, rubies and diamonds.  Along with the marketing of Airworld Atari also released advertisements for the grand prize where the four winners of the SwordQuest game contest would complete in a final contest to win the ultimate prize, “The Sword of Ultimate Sorcery” worth $50,000.

The “Sword of Ultimate Sorcery” prize consisted of a silver blade with an 18-karat gold handle covered with diamonds, emeralds, sapphires and rubies.  The fate of the prizes has become an urban legend among the gaming community since the cancellation of the contest.

Cinemassacre - The history of SwordQuest