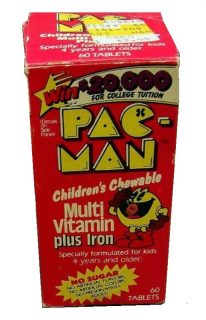 Pac-Man Chewable Vitamins were supplemental multi-vitamins for children based on the extremely popular arcade game Pac-Man.  Introduced in 1982 by the Rexall Corporation to gain market share in the children vitamin market.

Rexall licensed the rights to use the Pac-Man character from Bally Midway, the North American license holder of Namco’s Pac-Man.  Rexall wanted to attract existing customers that were purchasing Flintstones vitamins to gain a strong userbase for their new product while reducing their competitions market share by stealing the existing Flintstone consumers from Bayer.

Miles Laboratories introduced Flintstone vitamins in 1968 which were based on the cartoon series that ran from 1960 to 1966.   Miles Laboratories was acquired by Bayer in 1979 and the Flintstone vitamins continued to grow, reaching a 10 million plus consumer base.  Rexall wanted to tap into this market share by introducing a more current and popular children’s character.  By 1982 the Flintstones cartoon was long since discontinued with the last new episode airing in 1966, however reruns were still being aired through syndication.  Rexall’s ambition was to introduce a fresh character that was more relevant to children and in 1982 there wasn’t many characters nearly as popular as Pac-Man.   The hit arcade game was released in 1980 and rapidly grown in popularity, so much so that a song entitled “Pac-Man Fever” entered the Billboard top-ten in 1982 and a 30 minute Saturday morning cartoon series was created after the popular video game character. 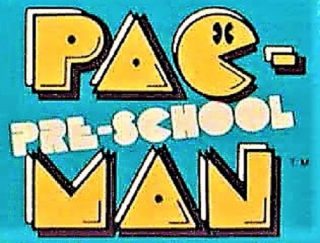 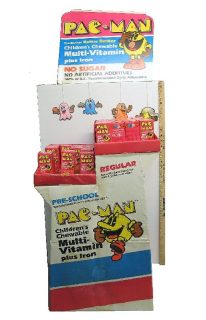 Rexall was not shy about trying to steal consumers away from their competition as their primary marketing campaign referenced and compared their product against Flintstone vitamins.  One of their marketing slogans was “Good-bye, Fred… Hello, Pac-Man” and compared how their product was better than the Flintstone vitamins.  Even their television commercial compared their product to their competitor’s product and ended with a 6-year-old Fred Savage saying “Good-bye, Fred… Hello, Pac-Man”.  The 1982 television commercial was Fred Savage’s television debut.

The vitamins were sold in pharmacies and grocery stores across North America using product displays that featured characters found in the video game.  The product initially released in two variations, multi-vitamin plus iron for kids under the age of 4 and multi-vitamin plus iron for kids 4 years old and over.  Rexall later expanded the product line by introducing a Pac-Man chewable calcium supplement for kids.

Ultimately Rexall was unable to attract enough parents that were purchasing Flintstone vitamins for their children to start purchasing their new product.  With the low adoption rate and small customer base, it was not financially viable to continue to license the rights to the Pac-Man character from Bally Midway and the product was discontinued.