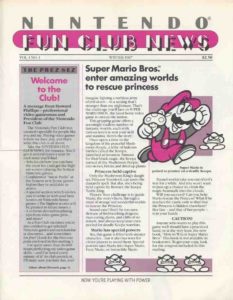 The first issue of Nintendo Fun Club News was released in February 1987, covering Nintendo content for the Winter and Spring of 1987.  Nintendo initially distributed the newsletter on a quarterly basis to subscribers but due to the popularity of the newsletter and the amount of content being release for the Nintendo Entertainment System they changed to a bi-monthly release in 1988.  The newsletter was also available to non-subscribers for $2.50 at retail locations.

The roots of the Fun Club can be traced back to Nintendo’s in-house game counselor toll-free telephone hotline.  When the Nintendo Entertainment System was launched in 1985, Nintendo quickly discovered that kids were craving additional information about games.  Consumers not only wanted information about upcoming games but also help on how to play and defeat games they had already owned.  Nintendo wanted to setup a mechanism to help kids out with their games, and that is when the Nintendo hotline was established.

Howard Phillips was one of Nintendo of America’s first employees and was instrumental in the launch of the Nintendo Entertainment System in North America.   With Phillips cumulative knowledge, his expertise with the entire Nintendo video game library and his age falling between Nintendo’s targeted child demographic and their parents, he became a core liaison between the Japanese developers at Nintendo and the North American market. Phillips would test games for Nintendo as a game evaluator, testing Japanese developed Nintendo games for their quality and assisting in the game localization process.

Phillips’ sheer knowledge of games was astonishing, earning him the title “Game Master” bestowed to him by executive Peter Main.  Phillips would help establish and manage the Game Counselor toll-free telephone hotline, where callers could ask Nintendo employees for help with gameplay. In late 1987, Phillips and Gail Tilden consolidated and expanded this expensive practice into mass media form by creating the free-of-charge Nintendo Fun Club. Howard Phillips would hold the title of President of the Fun Club, a newsletter that would quickly achieve over 600,000 subscribers.

After the seventh issue of the Nintendo Fun Club News, Phillips and his team worked on rebooting the bi-monthly newsletter into a full-blown magazine titled Nintendo Power. In March of 1988, Tilden was promoted to Director of Publications and shifted focus to the creation of a monthly video game magazine. During this time Tilden founded the Nintendo Power magazine and was responsible for the entire publication division of Nintendo of America.

a look at Nintendo Fun Club News with NES Complex