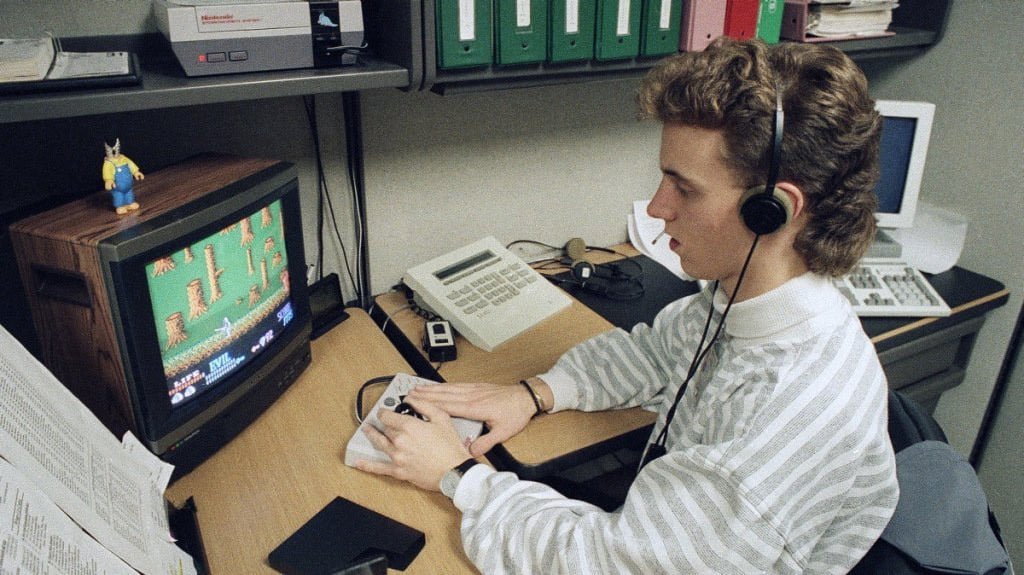 The Nintendo Power Line was a video game assistance service that Nintendo offered in the late 1980s through the early 2000s to gamers that needed help progressing in a video game.  Nintendo of America hired and trained employees to act as “Game Counselors” to assist their customers with any questions they may have had on a game for one of their consoles.

The Game Counselors were made available to customers via a toll hotline known as the Power Line which was established in 1987.  Gamers could contact a game counselor by phone to get advice and assistance on games for any Nintendo platform.  The service was introduced as away to ensure gamers would get the most value possible out of their game purchases.  When the service was introduced, consumers did not have many ways to get detailed information regarding games.

Predating the internet, the Power Line was the most efficient way to obtain the needed information gamers required when they were stuck in a game.  When the service was established in the fall of 1987 it began as a free consulting service where customers were able to contact Nintendo Game Counselors by calling the toll-free number 1-800-422-2602.  The new service offering was advertised in Nintendo’s free to join fan club newsletter, Nintendo Fun Club.

As the service evolved and the call volumes began to grow large in size Nintendo changed the service from a toll-free number to a local phone number in the Seattle area, (206) 885-7529.  The service remained free of charge to consumers however customers were now responsible for any long-distance charges that applied.  Nintendo continued to push the service as they believed that it was extremely important that consumers felt that they received their moneys worth when purchasing a game to ensure they would continue to purchase additional games in the future.

Based on this philosophy Nintendo continued to look for ways to assist their consumers while at the same time promote their brand.   This led to the publication of the monthly magazine Nintendo Power which covered news, previews, reviews and in depth look at games released for Nintendo platforms.  When the first issue of the magazine was published in the summer of 1988 Nintendo included a full two-page ad for the Nintendo Power Line on the first two pages of the magazine.

Nintendo introduced the hotline service to help gamers to advance past complicated parts of games so that the gamer would not simply give up and stop playing the game they purchased.   Nintendo aimed to solve this with the introduction of the Power Line hotline however they did not want to simply provide players with the answer on how to get past an obstacle.   Nintendo instead wanted their counselors to give hints and provide guidance to players so that they could figure out the solution on their own which created a more rewarding experience for the player.

Right from the beginning of the Power Line service, Nintendo felt that it was important to spotlight their game counselors.   The fall 1987 issue of the Nintendo Fan Club newsletter included a full-page highlighting some of their game counselors in a “Profiles” piece to help establish a personal connection between Nintendo and their customers.  This is something Nintendo continued to do when they transitioned from the Fan Club newsletter to the Nintendo Power magazine.   In addition to having a profile piece on their Game Counselors they also created a feature called “Counselors’ Corner” which became a standard piece appearing in Nintendo Power for close to two decades.

While other features in Nintendo Power provided great information on games, they were more geared towards news, previews, and reviews while Counselors’ Corner provided more specific information and strategies.   Detailed game maps and broad instructions could be found in other features within Nintendo Power however there were still many games that required detailed walkthroughs for players to advance through trickier challenges.  The walkthrough found in the Counselors’ Corner feature were written by Nintendo’s Game Counselors and a lot of the time the topics were based on the common calls the hotline would receive from gamers.

The Nintendo Power Line and their Game Counselors became very popular in the late 80s, so much so that they were incorporated in the 1989 hit movie The Wizard.   The hotline was part of the plot of the movie where the lead characters used the service as part of their strategy to prepare for a video game competition.

At the height of the service’s popularity Nintendo how approximately 350 employees staffed between Game Play Counselors and Customer Service Representatives in order to assist customers that called into the hotline.  Nintendo had a free game checkout center where any of their employees could check-out a game from their internal library system to strengthen their knowledge of various games.  Each counselor would create their own notes, hand drawn maps and list of passwords for games that they played then the material was photocopied to be shared among the contact center.   These materials would be combined over time and added to binders to create a support playbook which was referenced to assist customers that called into the hotline.   This approach was used up until the early 1990s when Nintendo introduced an internal content database known internally as ELMO.

The service continued to evolve and on March 1, 1995, was overhauled by splitting the service into two different offerings, a pre-recorded service, and a live interaction service.   The existing (206) 885-7529 phone number was converted to an automated Game Tip Line which operated on Nintendo’s new Voice Response Unit (VRU) which featured detailed pre-recorded game play information for popular games.  A phone tree was setup where players could select various games then select particular topics on the selected game to get relevant pre-recorded messages on the game, they required assistance with.

A new 1-900-288-0707 phone number was setup for the United States and 1-900-451-4400 for Canada in order to receive live assistance from a Game Counselor.   While the new pre-recorded service remained free of charge with the exception of long-distance charges, the live service became a billable service.   The new 1-900 toll service cost .95 cents per minute in the United States and $1.25 per minute in Canada.  Nintendo featured a very detailed article in the March 1995 issue of Nintendo Power explaining the new changes.

Prior to the changes made in March of 1995, the Nintendo hotline received over 42.6 million calls and 1.4 million letters by mail since the service began.   The Nintendo Call Center was handling an average of 120,000 consumer contacts per week and in order to remain viable the service needed to implement automated features and begin charging for more time-consuming interactions.  Nintendo continued to promote both services in each issue of Nintendo Power and within their video game manuals.

As the internet began to become mainstream in the mid 1990s video game walkthroughs and FAQs began to pop up on various websites.  Over time more and more information became available on sites and dedicated websites were created for video game walkthroughs.   The abundance of gameplay information on the internet resulted in less of a need for consumers to contact Nintendo directly for assistance.   By the early 2000s the demand for live gameplay consulting services diminished to the point where it was no longer sustainable to keep the service running.   Nintendo officially discontinued the Game Counselor hotline in 2005.