Inspired by the recent success of Sega’s Sonic the Hedgehog franchise Playmates Toys felt that the video game medium was the best way to introduce a new franchise to their demographic.  Playmates Toys created a subsidiary known as Playmates Interactive Entertainment Inc. that focused on video game publishing.  The newly found company immediately started to search for a developer to hire to create a video game based on a new intellectual property.  Partnering with David Perry, a video game programmer who recently left Virgin Games, Playmates Interactive Entertainment Inc. provided financial backing that allowed Perry to start up an independent studio in exchange for the publishing rights to their first three games.  Perry founded Shiny Entertainment in October 1993 and their first video game creation was Earthworm Jim.

In order to assist with the promotion of the game, Playmates Toys had ambitions to create Earthworm Jim action figures but did not want to commit to the endeavour unless a television series was produced to market the action figures.  David Perry met with executives at Universal Studios regarding the creation of an animated television series based on the upcoming game.  Universal Studios agreed to produce the series if there were toys that would accompany it’s premier.  Perry invited the heads of Universal Studio and Playmates Toys to dinner to discuss and finalize the three-way deal between the companies. 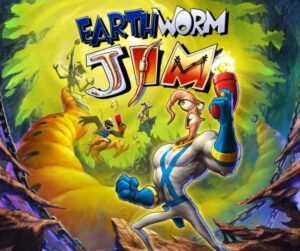 Playmates Toys’ created a toy line which included characters that were originally introduced in the video game however the action figures were closer in likeness to the cartoon television series adaptation of the video game.  The toy line launched in 1995 before the release of the sequel, Earthworm Jim 2 and featured 9 figures, one of which was a mail-in exclusive and along with the figures Playmates Toys released a vehicle included with the toy line.  The series included Psycrow with Major Mucus, Henchrat with Evil the Cat, #4 with Bob The Killer Goldfish, Princess What’s-Her-Name with Runt Zurb, Monstrous Peter Puppy with Peter Puppy as well as three variations of Earthworm Jim with Snott, four if you include the exclusive mail-in offer which was not advertised on the box of the figures.

A second series of figures were planned for release by Playmates Toys however was cancelled.  The series would have included larger figures and additional characters from the game and animated television series that were not included in the first series such as Queen Slug-for-a-Butt, Professor Monkey-For-A-Head and The Hamsternator.  Details on the second series were released along with images of the figures and vehicles in the series however the toy line never came to fruition.

From Pixels to Plastic & Toy Commercial