Atari vs Coleco was a lawsuit filed by Atari Inc. against Coleco Industries Inc. regarding patent infringement.  In August 1982 Coleco Industries inc. released the ColecoVision to compete against the Atari VCS which released 5 years earlier in 1977.  With Atari holding the vast majority of the 2nd generation video game install base Coleco targeted the Atari VCS in their advertisements.  They boasted that their console was much more advance and was designed with expansion in mind.  Shortly after the release of the ColecoVision console Coleco launched its first Expansion Module known simply as Expansion Module #1.  The expansion module gave the ColecoVision the ability to play Atari VCS games on its console. 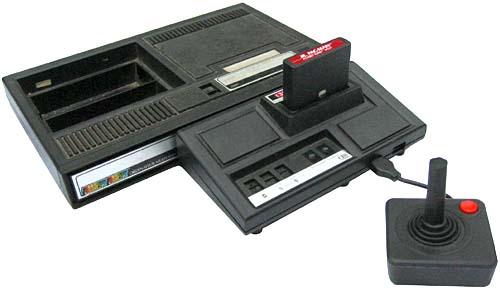 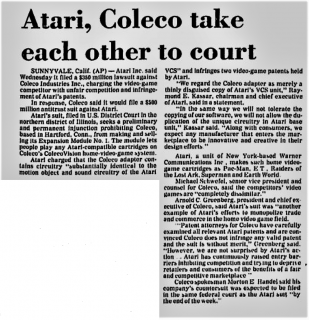 The hardware add-on only used the ColecoVision console for power and its RF connector to send video output to a television set. Atari instantly threatened to sue Coleco over the creation of the Expansion Module but Coleco’s legal team concluded that it would be completely legal to clone the Atari 2600 since the cloned units could be created using all off the shelf hardware without utilizing any copyrighted software.

Atari Inc. felt differently and on December 8, 1982 filed suit in U.S. District Court, Northern District of Illinois, Eastern Division against Coleco Industries.  They filed charges for patent infringement and unfair competition under State and Federal law.  The lawsuit sought a preliminary and permanent injunction against the manufacture and sale of Coleco’s Expansion Module #1.  Atari claimed that the product infringed on two video game patents held by Atari, U.S. Patent No. 4,112,422 and U.S. Patent No. 4,314,236.

Atari Inc. was seeking damages of more than $350 million and Coleco responded by filing a $500 million counterclaim, charging violations of antitrust law.  Coleco claimed that their product did not infringe any valid patent and that Atari’s suit was without merit.  Both parties appeared to have a strong case which the judge could have ruled in favour of either argument, so the companies began negotiation procedures.

The Expansion Module did not directly infringe on any of Atari’s patents for the 2600, however did modify Atari’s custom TIA (Television Interface Adaptor) chip used to generate screen display, sound effects, and reading input controllers. Coleco cut the TIA die into 4 parts, relocated them, and rewired to get the same result.  Warner Communications Inc., Atari’s parent company believed that it would be more profitable to license the rights to Coleco and make money off of the sale of each unit then it would have been to proceed with the lawsuit.

On March 11, 1983 both parties came to an agreement and announced that they have settled their all issues that were the subject of litigation.  Under the settlement Coleco could continue manufacturing and selling the Expansion Module #1 and could also ship their planned stand-alone Atari VCS clone console, Gemini which incorporated both a joystick and paddle on the same controller.  However, Coleco would do so as a licensee of Atari’s patents, and would pay a royalty to Atari Inc.