In 1982 Topps released a trading card set based on Nintendo’s hit arcade game Donkey Kong.  The set consisted of 32 cards containing stickers that could be peeled off and 4 different scratch-off game cards.  On the opposite side of the 32 sticker cards contained a portion of a picture that can be used to create a large Donkey Kong picture by collecting and combining cards.

The cards were sold in individual packs for 30 cents with each pack containing 6 cards in total, 3 rub-off cards and 3 sticker cards.   Each pack also contained a stick of gum and came in a wax wrapper with Donkey Kong featured on the front.

The scratch-off game cards included in the pack were based on the gameplay found in the arcade game.  Each of the four unique scratch-off cards were based on the different levels found in the arcade game.  On the back of the scratch-off game cards featured the rules for the game.  Consumers would basically scratch the gold circular areas found on the cards and advance through the stage to rescue Pauline.   The goal of the game was to get the highest score possible before uncovering any combination of 3 fireballs and barrels.  Since each game card contained multiple paths that can be taken to reach Pauline kids could play against each other to see who can obtain the highest score.

The 32 sticker cards were all based on things that can be found in the arcade game.  One side of the card contained either one large sticker or several small stickers featuring characters from the arcade game and quotes that fit the game’s theme.  The opposite side of the card contained a portion of a picture that could be used to make a larger Donkey Kong picture.   The set contained two larger pictures that could be created by combining 15 different cards.  Each of the large pictures had a different coloured border which allowed consumers the ability to distinguish which pieces went with which picture. 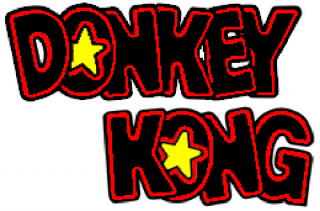