The concept for the console can be traced back to 1991 when Gunpei Yokoi was introduced to a prototype called the Private Eye.   Developed by Reflection Technology, the Massachusetts based company created a stereoscopic head-tracking device that incorporated a red LED eyepiece display.  Reflection Technology created a tank simulation game to demonstrate the Private Eye prototype to the consumer electronics market.   They presented their invention to companies such as Mattel, Hasbro and Sega, all of whom declined the technology due the it’s limitation of displaying a single color and the possibility of causing motion sickness.   Nintendo on the other hand felt differently about the Private Eye prototype and saw the potential in the technology.

Gunpei Yokoi’s initial vision was to use the technology to create a pair of goggles with head tracking capabilities that could be worn to create an immersive gaming experience.   Yokoi envision introducing a new concept of wearable technology to Nintendo’s product line, a concept well a head of it’s time.  Yokoi’s vision was to have Nintendo’s main product line focus on three categories, consoles, handhelds, and wearables.  Yokoi arranged for Reflection Technology to present their prototype to Nintendo’s president Hiroshi Yamauchi at their corporate headquarters in Kyoto, Japan. 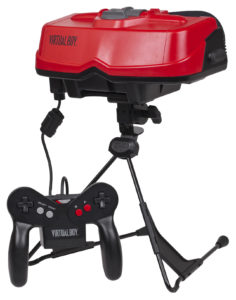 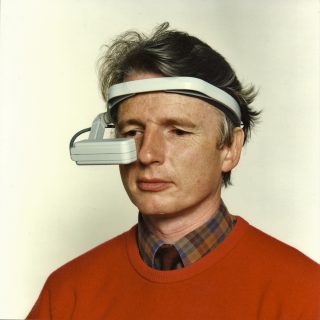 The presentation went well, and Yamauchi approved proceeding with investing in the new technology under Gunpei Yokoi’s guidance.  By the end of 1991 Nintendo invested $10 million to secure exclusive rights to the technology developed by Reflection Technology.  With the vision to create a headset that would offer a virtual reality experience with head tracking capabilities the R&D1 team began working on a proof of concept using the Private Eye technology.  Led by Gunpei Yokoi, the general manager of Nintendo’s R&D1 division the team began working on the project under the code name VR32.  While Yokoi’s vision was clear there were many challenges and roadblocks that would alter his vision of creating a wearable headset with head tracking capability and ultimately shifted to the development of a tabletop system with no head tracking.

The first major roadblock the R&D1 team ran into was Nintendo’s reluctance to develop a wearable device that would place a microchip with high radio emissions near a consumer’s head for a prolong period of time.   At the time the team was working on the prototype the safety of EMF radiation on the brain was unknown due to the lack of thorough studies.  In addition to Nintendo’s safety concerns the development team discovered that the electric and magnetic fields (EMF) generated by the technology caused interference on the display.  Due to the proximity of the chipset visual noise was produced on the display resulting in the CPU having to be covered with a metal plate.   This made the system too heavy to incorporate into a wearable unit forcing R&D1 to abandon the goggle concept.

As the console evolved from a wearable headset into a heavier device other form factors were considered before the team landed on the final tabletop design.   One such consideration was to incorporate a shoulder stand to redistribute the unit’s weight so that it could still be worn however the design did not prove to be efficient.  Nintendo’s legal team feared liability issues with a wearable design as consumers may accidently fall down a flight of stairs while wearing the unit.  Due to technical limitations in the early 1990’s coupled with Nintendo’s overly cautions approach to the idea of wearable technology caused the project to evolve into a bulky tabletop unit with no head tracking capabilities.   This drastically changed the vision Yokoi had for the Private Eye technology when they secured exclusive rights for the technology from Reflection Technology.

The final design of VR32 began to take shape as a bulky head-mounted display attached to a bi-pod that would rest on the surface of a table.   This design forced consumers to hunch over the system in order to play it, making for an uncomfortable experience for lengthy sessions of gameplay.  As the unit began to assume it’s final design Nintendo’s marketing department started to develop a marketing strategy for the new system.  They chose to combine the term virtual reality with the name of their immensely successful Game Boy handheld to land on the name Virtual Boy.

After 3 years of development Nintendo showcased the Virtual Boy to the public on November 15, 1994 at the Shoshinkai Software Exhibition in Harumi, Japan.  Attendees of the exhibition had the opportunity to play Space Pinball and Teleroboxer during the tradeshow to experience was the Virtual Boy had to offer.  Reactions were mixed as the Japanese audience were astonished by the stereoscopic 3D but bewildered by the choice of an all red display and the systems targeted retail price of $180 USD.   At the time the Game Boy bundled with a copy of Tetris retailed for $60 USD and consumers were having a hard time rationalizing a price that was three times the amount of Nintendo’s handheld system.

Nintendo showcased the Virtual Boy for the first time in North America two months later at the Winter CES show in Las Vegas on January 6, 1995.  Again, the system was met with mixed reaction from the attendees at the North American tradeshow.  Nintendo choose to press forward releasing the system on July 21, 1995 in Japan and August 14, 1995 in North America.  After four years of development the system released during a time of transition for Nintendo, the Super Nintendo was being overshadowed by the newly released Sony PlayStation and the Nintendo 64 was still a year a way from being released.  Nintendo was hoping that the Virtual Boy would act as a stopgap until the development of the Nintendo 64 was completed.   They were hoping to intrigue their fanbase with the new stereoscopic 3D console until they were prepared to release the Nintendo 64 and compete with Sony in the fifth generation of home consoles. 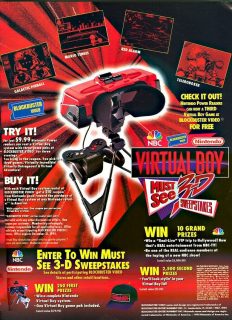 The Virtual Boy failed to gain the interest of consumers when it launched.   The red monochrome display and the form factor of the system where consumers had to uncomfortably place their head against the eyepiece were seen as negative traits that consumers were not willing to overlook to experience a new stereoscopic 3D experience.  In order to try and increase consumer interest in North America, Nintendo partnered with Blockbuster to rent the console to customers for $9.99 in a try before you buy marketing approach.  The unique strategy allowed Nintendo to get around the difficulty of conveying the system’s 3D effect in print and television advertisements but still did gain enough interest to change the fate of the system.

The system came bundled with Mario’s Tennis for $179.99 when it released but due to extremely poor sales the price of the console was reduced to $99.99 by May 1996.  The new price failed to attract customers and Nintendo began to pull support away from the system to focus on the upcoming Nintendo 64 home console.  Nintendo began to drop any reference to the Virtual Boy in their marketing and by August 1996 they officially discontinued the system.  By late 1996, the system was being sold in bargain bins in the clearance aisles of toy stores such as Toys “R” Us for less than $30.

Even though the console did not offer a virtual reality experience it did introduce stereoscopic 3D graphics to mainstream video games.  It provided a 3D experience that could not be simulated on conventual handheld devices or television sets at the time.  The games utilized a parallax effect to create the illusion of depth, an approach that would re-emerge decades later with the release of the Nintendo 3DS in 2011. The release of the system may have been a failure on the surface, but it did introduce the concept of wearable technology and virtual reality gaming, a concept that would be revisited two decades later with the Oculus Rift, HTC Vive and PlayStation VR. 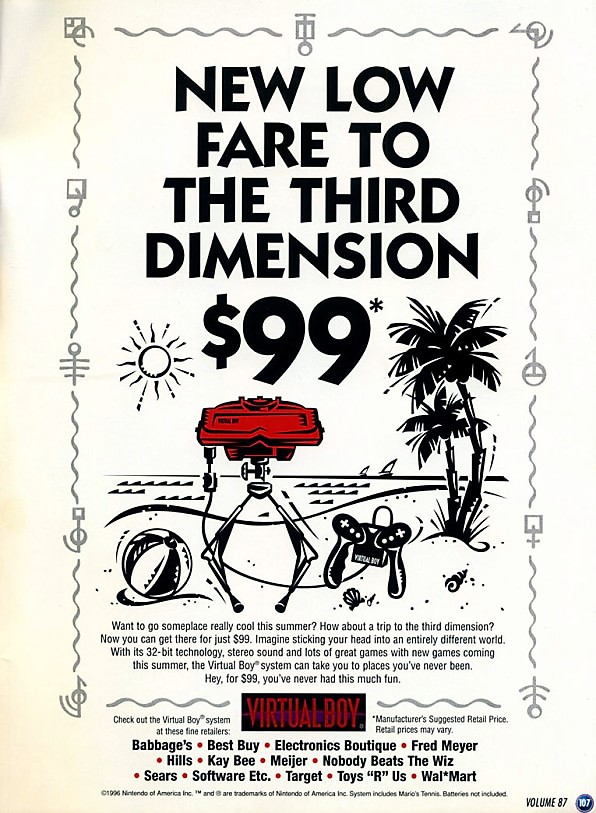 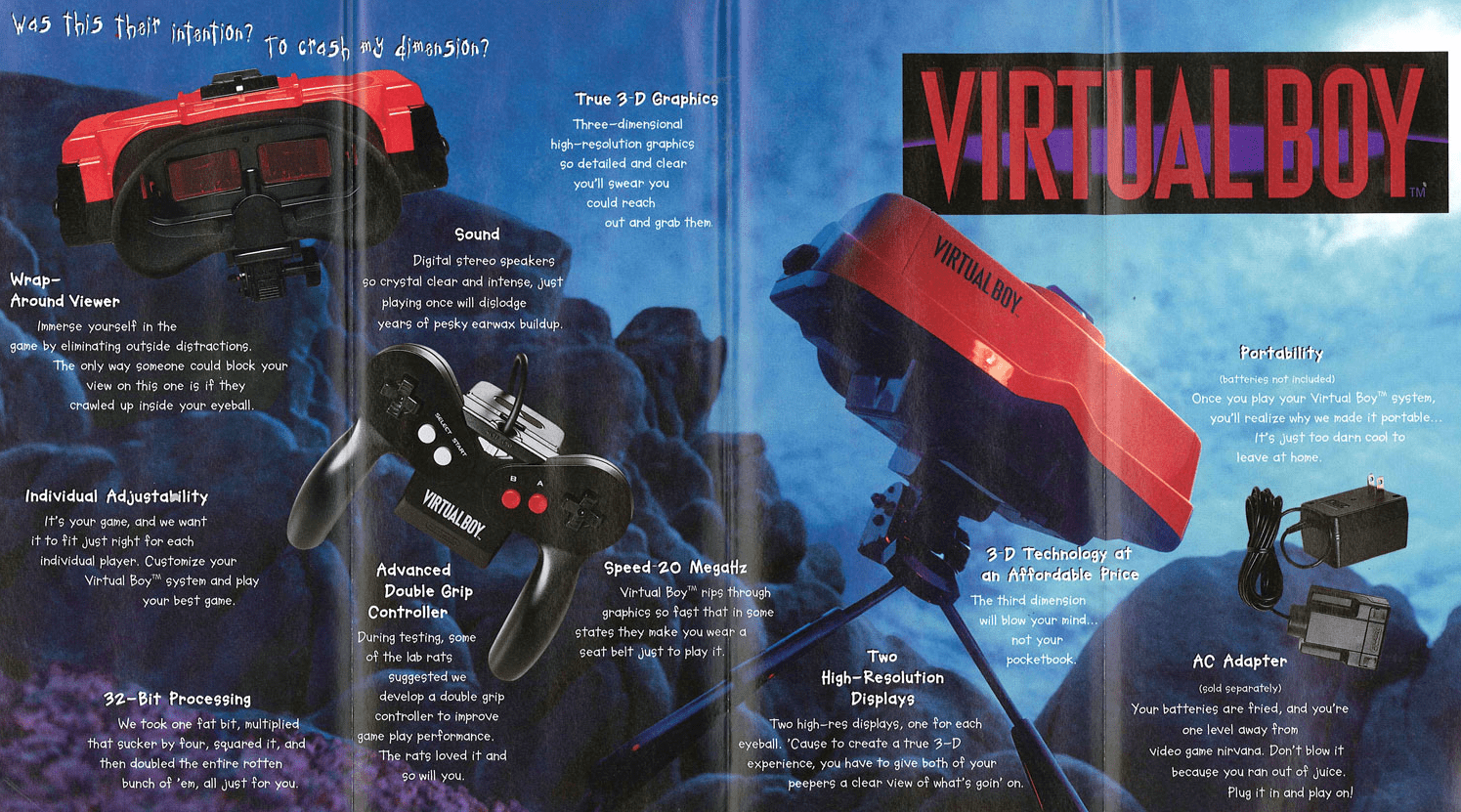