The Justifier is a light gun peripheral designed and manufactured by Konami for the Sega Genesis / Mega Drive, Super Nintendo and PlayStation home video game consoles.  The light gun accessory came to fruition with the success of the 1992 arcade game Lethal Enforcers.   The popularity of the arcade game opened the door for console ports.

Konami decided to port Lethal Enforcers to the Sega Genesis, Sega CD and the Super Nintendo but since each system did not have a standard suitable light gun peripheral one needed to be developed for the games release.  Konami would end up designing and manufacturing the light gun peripheral themselves and included it bundle with the game.   The light gun was designed in the shape of a revolver and was marketed as “The Justifier”.

The Justifier was modeled after the Colt Python revolver but were brightly coloured due to the early 1990s fear that light guns could lead to gun crimes and to clearly distinguish the gun as a toy.  Konami designed Lethal Enforcers to only work with The Justifier and is incompatible with other light guns such as the Sega Menacer and Nintendo’s Super Scope.   This was done as Konami felt that the existing first party light guns were not adequate enough to replicate the arcade experience.  Since Lethal Enforcers was only compatible with The Justifier all versions of the game came packaged with the peripheral. 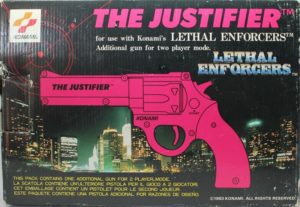 Konami included a port in the bottom of The Justifier that was bundled in with the game to allow for a second player experience.  The standard light gun which was bundled in with the game was blue and sold separately directly by Konami via mail order gamers could purchase a second pink multiplayer version which would plug directly into the bottom The Justifier with a 6-pin RJ-11 phone cord.  Since the pink multiplayer version of The Justifier uses a RJ-11 connector that connects to the primary light gun and not the home consoles directly, the pink Justifier is compatible with both the Sega Genesis and Super Nintendo.  Because of this, the packaging for the second Justifier does not feature branding for either Sega or Nintendo.

Due to the light gun’s resemblance of a Colt Python revolver it drew a lot of negative attention and was involved in the video game violence controversy of the early 1990s resulting with the accessory not being sold in toy stores.   On December 7, 1993 and March 5, 1994, members of the United States Senate Committees on Governmental Affairs and the Judiciary held congressional hearings with officials in the video game industry including Nintendo and Sega.  The hearings were regarding violence in video games and perceived impacts on children.  The hearing was a result of public concern on the 1993 home console releases of Night Trap and Mortal Kombat but quickly expanded to cover gun violence bringing Lethal Enforcers and The Justifier to the forefront of many heated discussions.

Along with Night Trap, the Genesis version of Lethal Enforcers was one of the first video games to receive a MA-17 rating by the Videogame Rating Council (VRC), Sega’s video game rating system that predated the industry-wide standard Entertainment Software Rating Board (ESRB).  Despite the controversial nature of The Justifier and its involvement in government hearings as well as being referenced in the Video Game Rating Act of 1994 the accessory was successful enough for Konami to develop and expand the library of games that were compatible with the device.

The accessory first released for the Sega Genesis / Mega Drive console in late 1993 and for the Super Nintendo in early 1994.   When Konami decided to expand the footprint of The Justifier and make it available for the PlayStation, they made the decision to change the device’s design.  The PlayStation version of the light gun was modified so that it would not resemble a revolver and was made to have a more toy like appearance.  The gun was manufactured in green and was the first light gun made available for the PlayStation console.   Along with the design change Konami rebranded the device in Europe and Japan selling the peripheral as the Hyper Blaster.  The European version of the Hyper Blaster was colored green like the North American version, but the Japanese model was black. 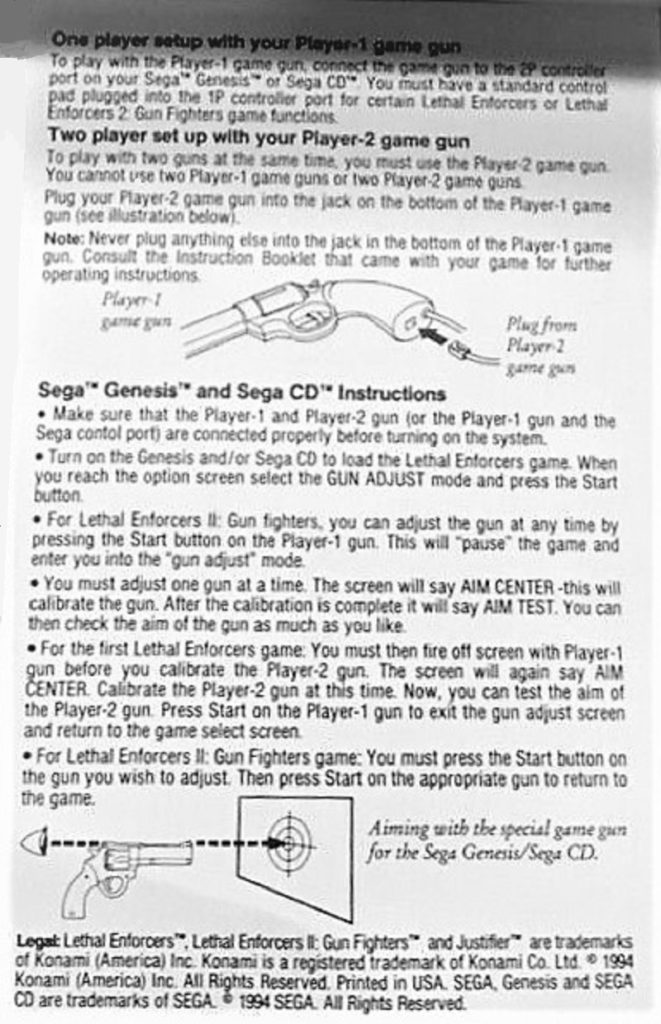 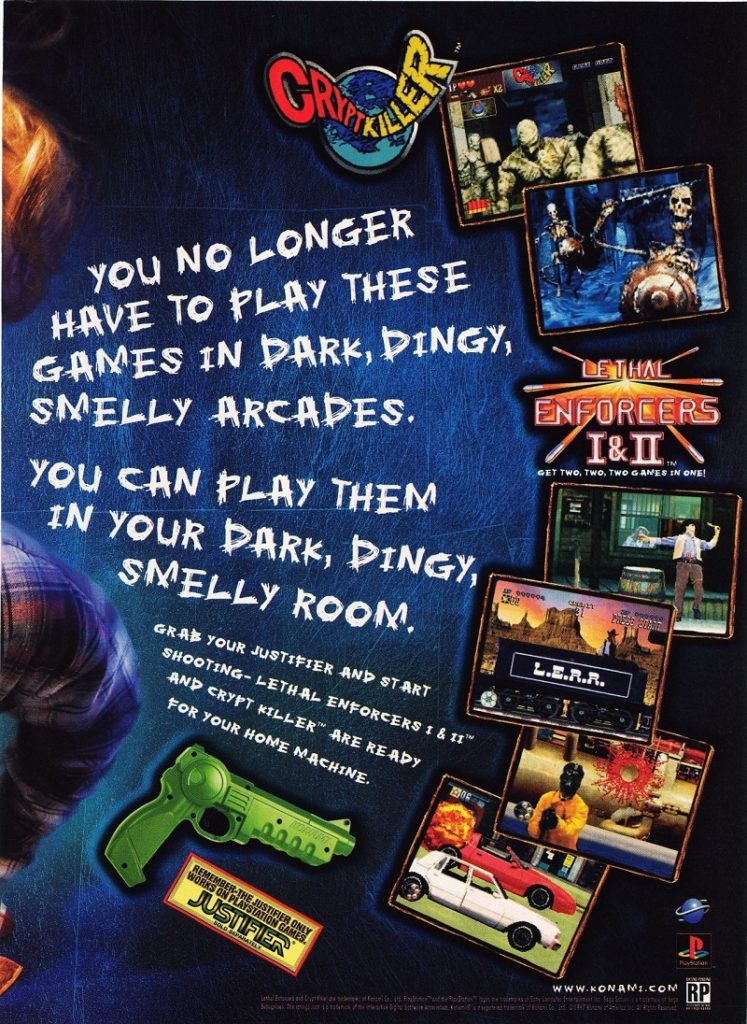 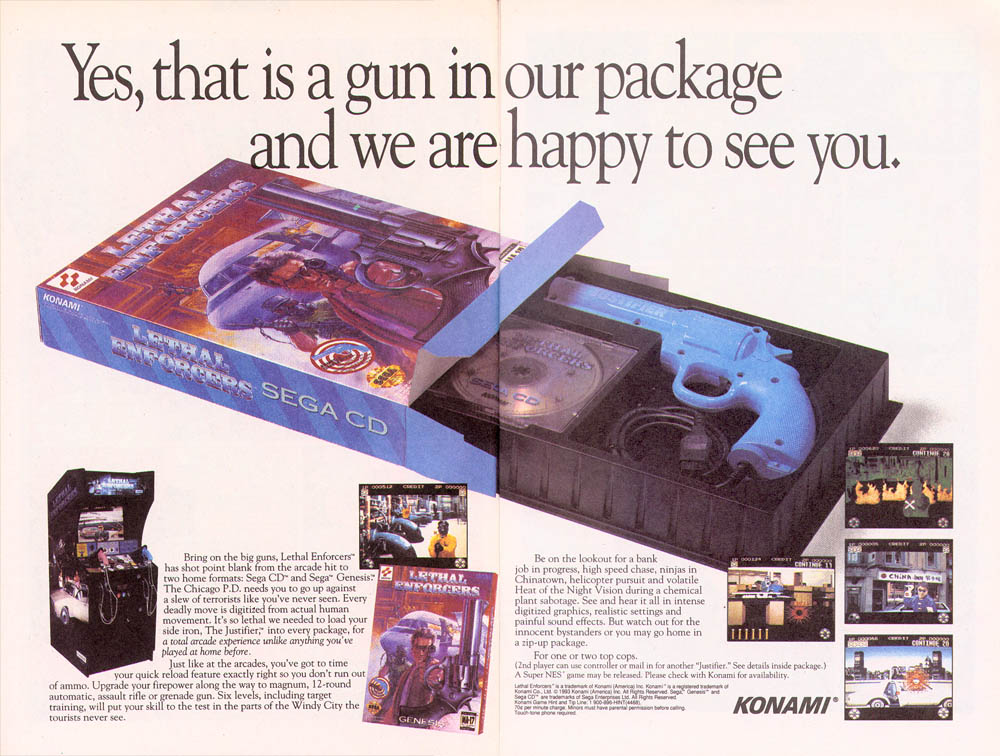