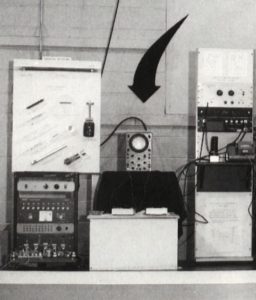 William Higinbotham a physicist at Brookhaven Lab’s in New York realized how most of the science exhibits were non-interactive and he wanted to change that. In the spirit to attract more attention to the annual visitor’s day at Brookhaven Higinbotham had the idea to create a tennis computer game where two players could compete against each other.

Higinbotham had access to an analog computer which Brookhaven Labs used for solving mathematical problems. The computer came with an instruction manual showing basic programing and how it could be programmed to simulate a ball bouncing which inspired Higinbotham to create a two player tennis game. Higinbotham used this analog computer and an oscilloscope to create this game titled “Tennis for Two” which was used to entertain visitors at the Brookhaven National Laboratory. “Tennis for Two” displayed a simplified tennis court from the side and featured a gravity controlled ball that needed to be played over the net. The game was played with two box shaped controllers, both equipped with a knob for trajectory and a button for hitting the ball.

“Tennis for Two” was first introduced on October 18, 1958 and was a huge success on visitor’s day. The exhibit was setup in the gymnasium and hundreds of people lined up just waiting for a turn to try out Higinbotham’s new creation. The game was exhibited for two seasons before it was dismantled in 1959.

Higinbotham never applied for a patent because he knew if he did it would have belonged to the federal government and he would not have seen any money for his creation. Higinbotham stated that the main reason he did not file for a patent was that at the time the game did not seem to be any more novel than the bouncing ball simulation that was in the instruction manual that came with the computer he used to program his game. The equipment that went into his game also weighed several hundred pounds and was very expensive so he did not see it as being something that could be massed produced. 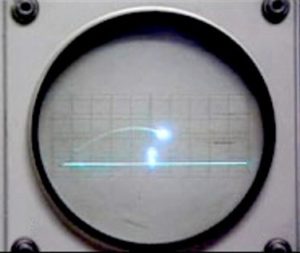 The history of Tennis For Two