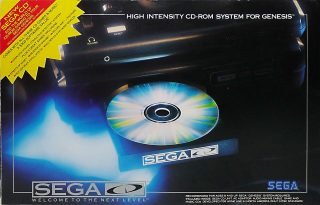 The Sega CD, also known as the Mega-CD is an add-on hardware device for the Sega Genesis / Mega Drive video game console.   The add-on accessory was designed to extend the life span of the Genesis console by offering an optical based media that was capable of storing full motion video (FMV).

Sega released the Mega Drive console in Japan in 1988 and the renamed Genesis in North America in 1989.   In an attempt to stay one step ahead of their competition, mainly Nintendo at the time, they released numerous add-on devices for the Mega Drive / Genesis.  The first of which was the Mega-CD that released in Japan on December 12, 1991, followed by the rebranded Sega CD version that released the following year in North America. 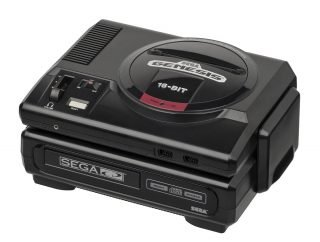 The add-on device attached to the base console to extend the Genesis’ capability by giving the console the ability to play compact disc (CD) and enhancing the console’s hardware functionality with the inclusion of a faster CPU.   The graphical enhancements made possible by the add-on allowed developers to incorporate sprite scaling and rotation into their games.  The system was also capable of playing audio CDs and came with a built-in media player.  Consumers could utilize the standard composite RCA ports on the back of the unit to connect to a stereo and use the Sega CD as extension of their stereo system to play audio CDs.

NEC was the first console manufacture to release CD based hardware with the release of the PC Engine CD-ROM² in December 1988 in Japan.  Sega’s plan was always to extend the functionality of the Mega Drive / Genesis by releasing add-ons and designed the console to have an expansion port.  Since the console was capable of expansion Sega assigned Tomio Takami to oversee the development of a CD-ROM based add-on to keep up with their competitors. 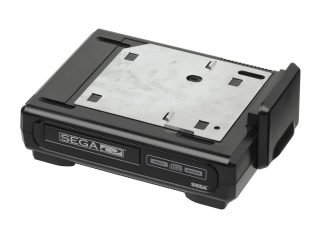 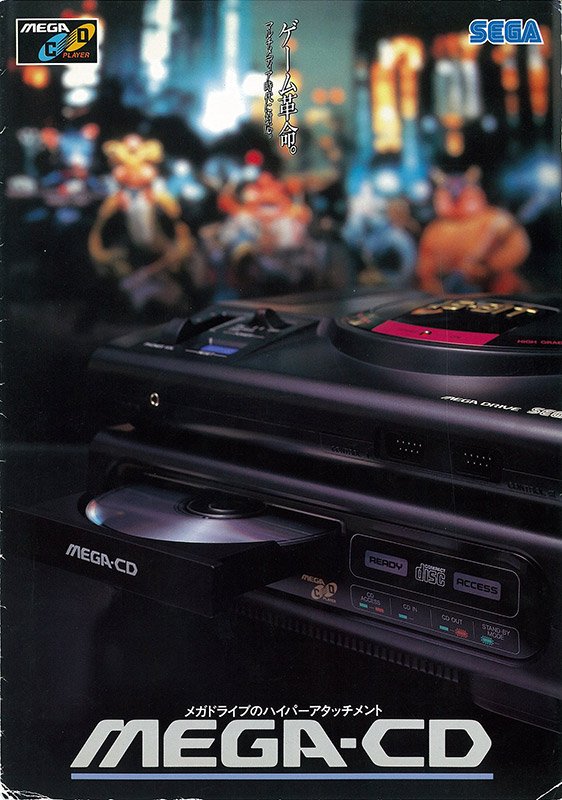 The original vision for the system was to simply match the performance of the PC Engine CD-ROM² and retail it for around ¥20,000, approximately $150 USD at the time.  However, after the development team started to assess the PC Engine CD-ROM² hardware they discovered numerous flaws and limitations they wanted to rectify.   In addition to doubling the amount of RAM in the system to reduce loading times, Takami wanted to implement hardware scaling and rotation which Sega was incorporating into their arcade games at the time.  To achieve the required effect a dedicated digital signal processor (DSP) was required.

Because the Mega Drvie’s CPU was too slow to handle the desired new graphical capabilities of the Mega-CD, an additional Motorola 68000 CPU with a faster clock speed was incorporated into the system.  Sega partnered with JVC to develop the optical drive and the estimated cost of the system increased drastically from the original mandate of ¥20,000.  By the time the development team finalized the design of the add-on the cost of the system doubled and ended up launching for ¥49,800.

Sega’s development of the Mega-CD / Sega CD hardware was fairly impressive but due to their concern of potential leaks caused drastic issues with software development.  The fear of their hardware specifications being leak lead to Sega refusing to consult with Sega of America until the hardware was finalized and made public at the 1991 Tokyo Toy show.  Sega’s reluctance to share hardware specification and development kits to internal teams and third-party developers caused a shortage of finished software when the console launched in all territories.

A total of 27 third party studios agreed to develop games for the Mega-CD when it was revealed on June 6, 1991, at the Tokyo Toy Show.  Sega insisted that the console would release before the end of the year which did not give developers enough time to create games that could meet the system’s release date.  The system ended up releasing on December 21, 1991, with only two launch titles, both third party ports of Japanese home computer games.  The high retail price of ¥49,800 coupled with the lack of available quality titles for the system resulted in low initial sales.

The Mega-CD started off o the wrong foot, a mistake that Sega of America was adamant they would not repeat.  The rebranded Sega CD did not launch in America until a year after it released in Japan.   At that time much more games were released for the Mega-CD however Sega of America deemed them as not suitable for a western audience.  Sega of America had no plans to release the Sega CD in North America until more software was available.

The Sega CD launched on October 15, 1992, for $299 USD with nine launch titles, two of which were very intriguing to the North American market.   Sewer Shark and Night Trap featured full-motion video (FMV) and provided a film like experience to gamers, something cartridge media was unable to achieve at the time.  FMV games would become a staple of the Sega CD and would ultimately be its downfall.   While FMV games were novel when they first released the demand for FMV games quickly faded by the mid 1990s.    The system became plagued with games that featured full motion video sequences at the expense of gameplay.   While full motion video was state-of-the-art at the time, video game developers were not implementing it into games to enhance gameplay but instead to show off the capability of the system leaving a shallow experience. 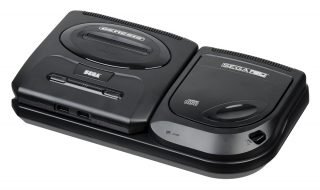 In an effort to lower the price of the add-on system Sega revised the hardware to lower production cost and make it more sustainable to continue manufacturing the console for all regions.  The revised hardware was smaller and removed the use of a motorized disc tray in favour of a top loading setup.  The model 2 unit released in Japan on April 23, 1993, and released throughout North America several months later, bundled with one of the system’s bestselling game, Sewer Shark.

Sega would later release a combined Genesis and Sega CD model called the Genesis CDX before shifting their focus to their second hardware add-on device for the Genesis, the 32X and ultimately their next generation home console the Sega Saturn.  In addition to the models released directly by Sega three other variation of Mega-CD / Sega CD systems were released.

While working with Sega on the development of the Mega-CD, JVC arranged to have their own variation of the hardware released under their branding.  JVC released the Victor Wondermega, a combined Mega Drive and Mega-CD with high-quality audio.  The Wondermega was released on April 1, 1992, in Japan and was later redesigned for North America as the JVC X’Eye and release in September 1994.

Released exclusively in Japan, Aiwa released the CSD-GMA, also known as the Aiwa Mega-CD, a combination Mega Drive and Mega-CD system built into a boombox.   The CSD-GMA was the ideal formfactor for consumers who were looking for maximum portability for the Sega based console.  This model is exceptionally rare as it was sold at the tail end of the Mega Drive’s life cycle.  The device released in September 1994, only two months before the release of the Sega Saturn in Japan.

Over 200 games were released for the Mega-CD / Sega CD across all regions before it was discontinued.  Sega even released six games that were designed to utilize both the Sega CD and 32X.  These games were labelled 32X CD and required consumers to have both the 32X and Sega CD in order to play the disc-based games.

Over the course of the Sega CD’s lifespan the system featured a number of acclaimed games such as Sonic CD, Sol-Feace, Shining Force CD, Final Fight CD, Lunar: The Silver Star, Popful Mail and Snatcher.  Even though the system had a number of acclaimed games it is better known for its FMV games such as Sewer Shark, Night Trap, Ground Zero, Corpse Killer, Prize Fighter and Mad Dog McCree.  The combination of the system’s high price and the lack of software support from Sega resulted in low sales and a short lifespan for the console.  Sega only managed to sell 2.24 million units worldwide before discontinuing the system to focus on the Sega Saturn. 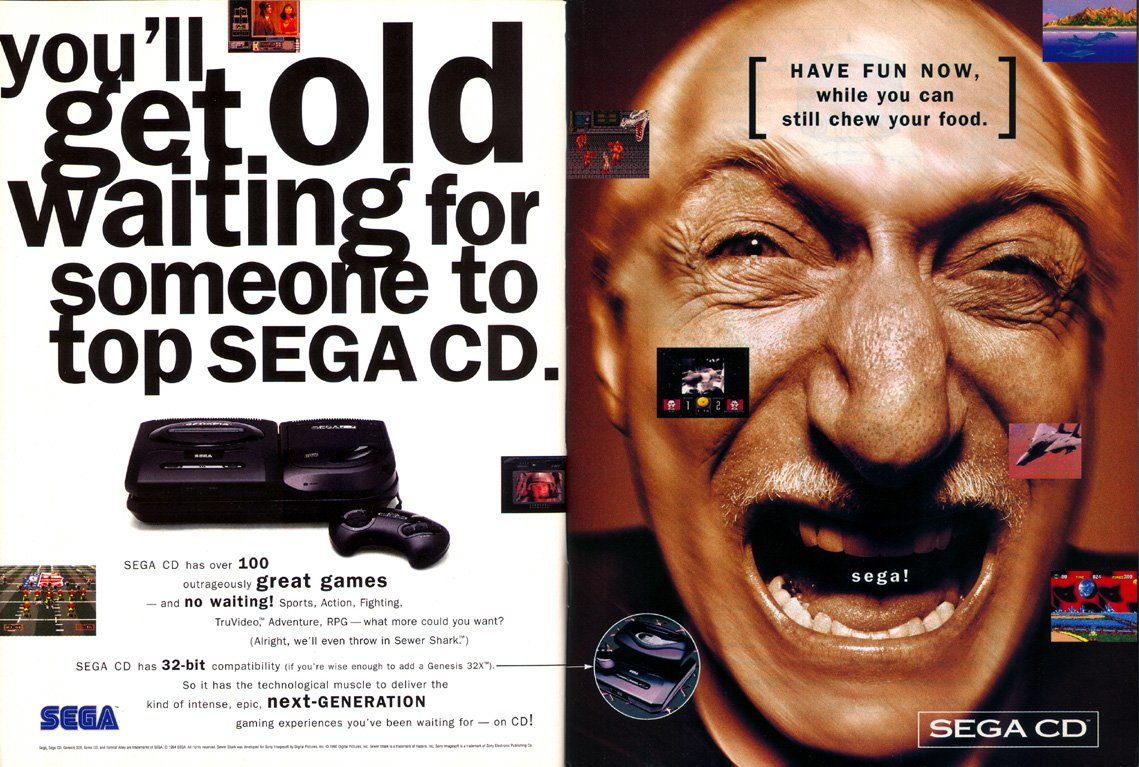 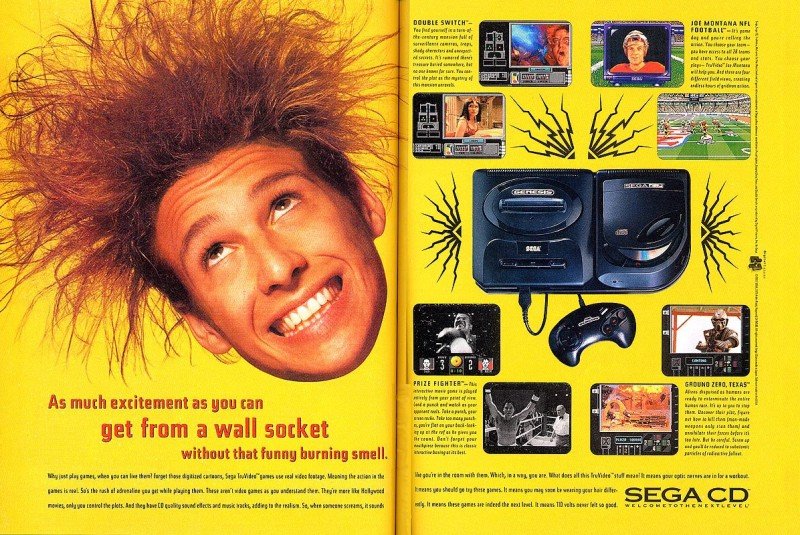 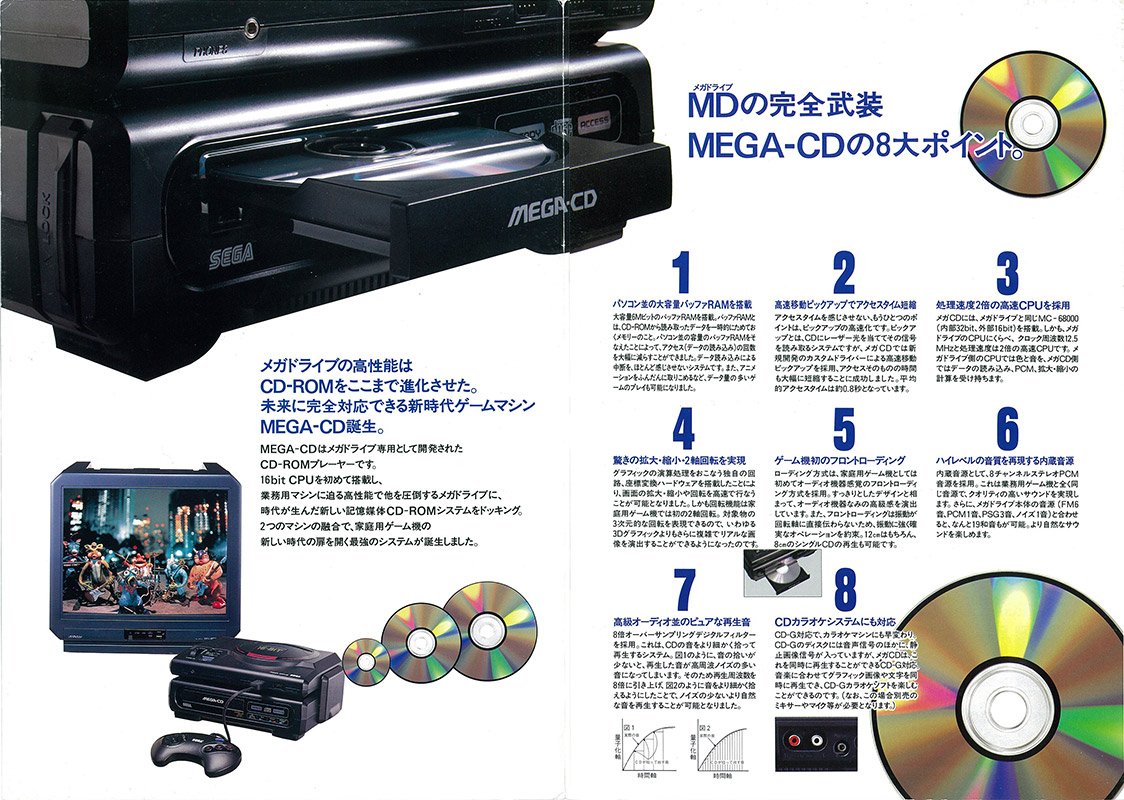 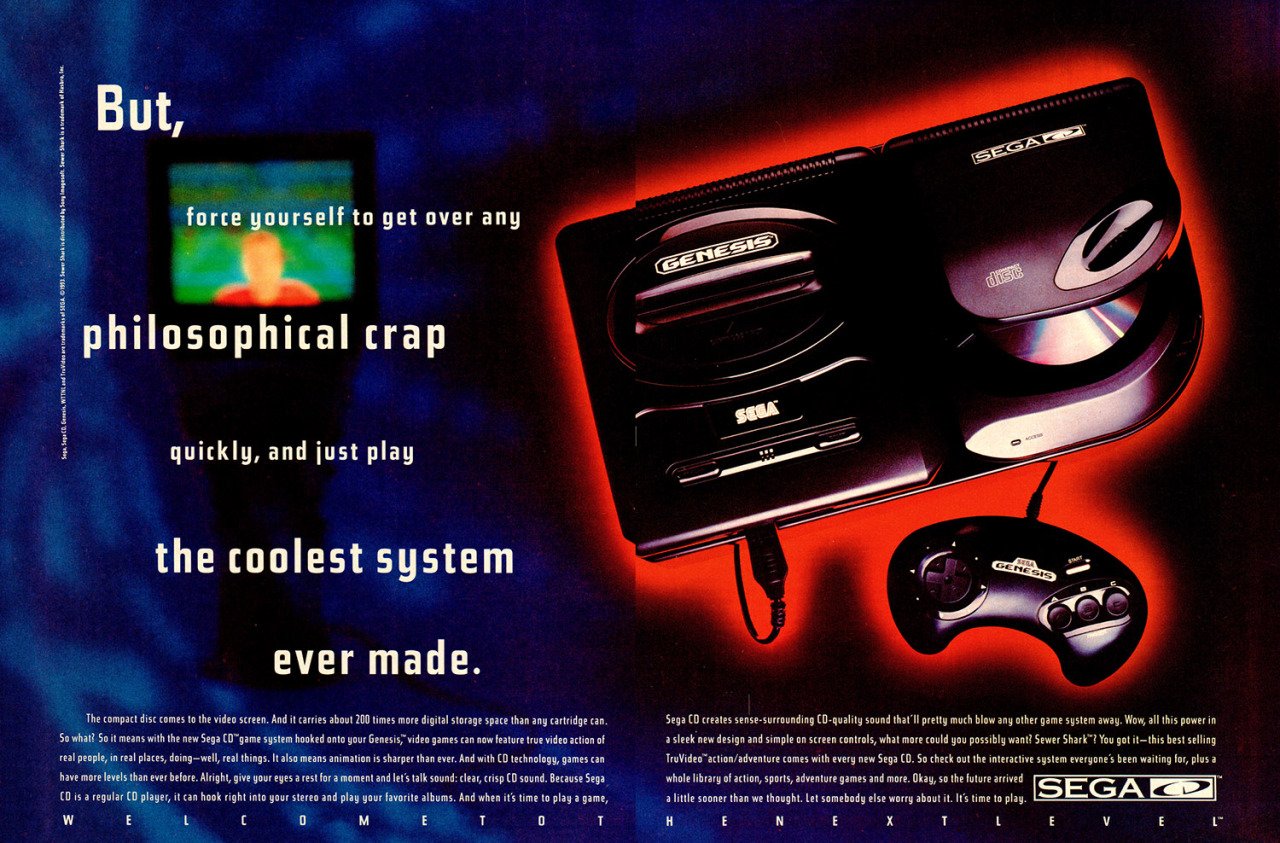 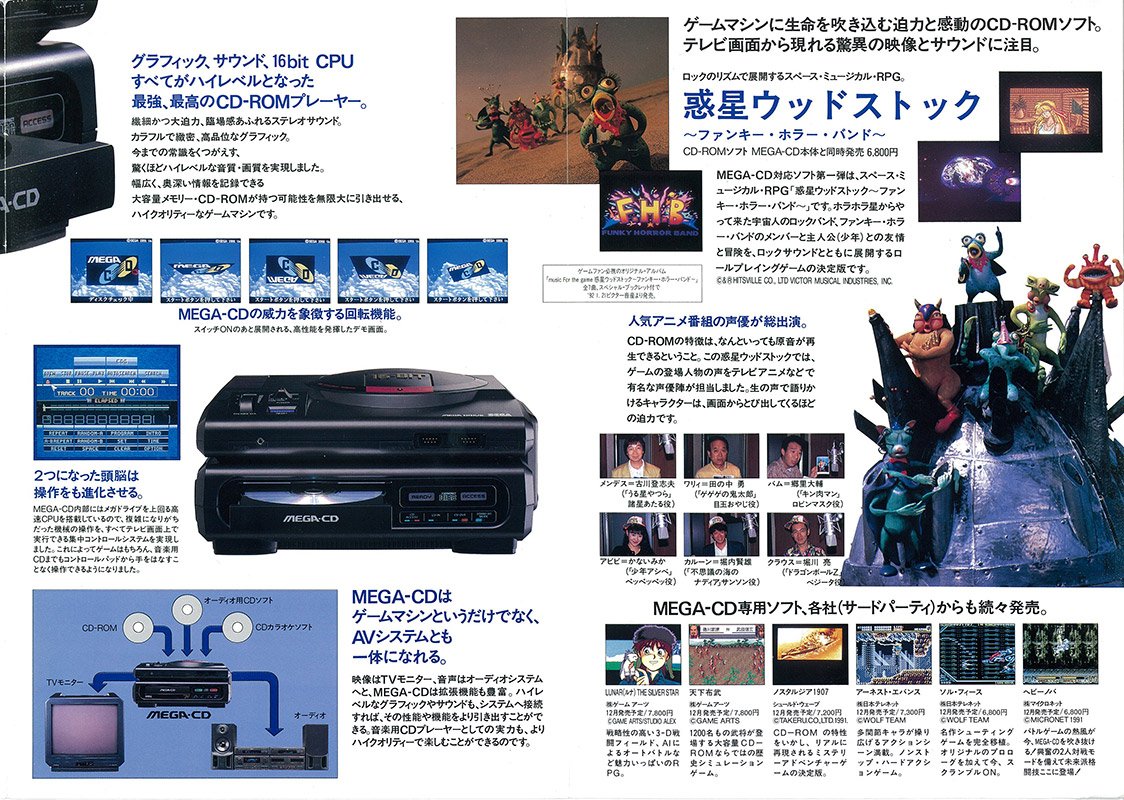