The Power Glove is a motion gesture controller accessory for the Nintendo Entertainment System that was manufactured and distributed by Mattel in 1989. It was the first virtual reality technology that was commercialised and released as a consumer product.

The origins of the Power Glove can be traced back to 1987 when Christopher Gentile of AGE had the idea to involve virtual reality in video games. He wanted to create a playable environment that could be controlled via motion gestures and contacted VPL about using their Data Glove as a proof of concept. The executives at VPL where intrigued by the concept of using their Data Glove in video games and allowed AGE to use their product and provide him with development software to carry out this project.

The optical flex sensor glove was conceived by Thomas Zimmerman in 1981 and patented by him in 1982. While refining his vision for the Data Glove, Zimmerman met Jaron Lanier who was working on a visual programming language. The two seen great potential in combining their inventions realizing that the glove could perform gestures which could be identified by the visual programming language to preform virtual reality type task. Zimmerman and Lanier formed the company VPL Research which was the first company to focus on the study and development of virtual reality systems. 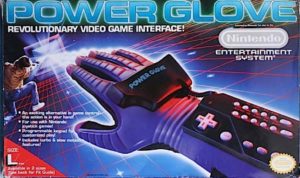 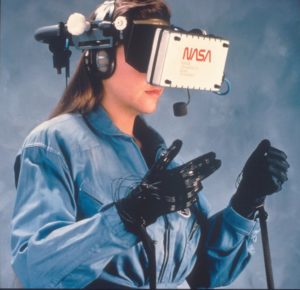 VPL’s initial creation was known as the Z-Glove which evolved over time to use fiber optic cables to measure the movement of the hand opposed to the original optical flex sensors. These fibers were connected to a receiver which captured all the movements and reflected the movement on screen through programming. This new iteration of the product was called the “Data Glove” and caught the attention of large companies and organizations. One of which was NASA, who used the Data Glove in simulators and to control robots remotely in real time.

Christopher Gentile invented and demonstrated, the Air Band which utilized the VPL Data Glove as a proof of concept on how the glove could be utilized. Gentile continued to experiment with the glove and used a Macintosh to design a program that allowed him to control Nintendo Entertainment System games with the Data Glove. He selected two of the most popular games at the time for his experiment, Super Mario Bros and Mike Tyson’s Punch-Out!!

Gentile looking for a manufacture and distributor to partner with contacted Mattel to present his prototype. Mattel was hesitant as they had entered the video game industry in 1979 with the release of the Intellivision and due to the video game crash of 1983 lost millions of dollars and made the decision to exit the video game business. However, the prototype drew the attention of Jill Barad, Vice President of Development and Marketing, who was extremely impressed with the product after trying it with Mike Tyson’s Punch-Out!!

Mattel made a deal to partner with AGE however the accessory needed to be completely redesigned from the ground up as the production cost of the “Data Glove” was $9,000, it was imperative that they drastically lower the production cost to be able to commercialize the product. The fiber optics were replaced with sensors that used semiconductor ink for the detection of finger movement and the magnetic sensors that calculated the position of the hand were removed in favor for the much more cost-efficient speakers and microphone to enable an “Ultrasonic Tracking” system. After five months they were able to create a final product at the cost of $23.

Branded the Power Glove, the accessory gained public attention due to its early virtual reality mechanics and significant marketing campaign. The final product had traditional Nintendo Entertainment System controller buttons on the forearm as well as a program button and buttons labeled 0 through 9. Players would press the program button and a numbered button to input commands to inform the program how the motion gestures should be interpreted.

The Power Glove came with a program guide that listed codes for 54 games that could be used with the peripheral. Two games were released specifically for use with the Power Glove, Super Glove Ball and Bad Street Brawler. These games were branded as part of the “Power Glove Gaming Series” and did not require players to enter a program code to inform the accessory how to interpret the motion gestures as the games were specifically designed for the accessory it automatically knew how to handle the motion control.

Released in October 1989 for $89 the Power Glove was the hot must have Christmas item for the year. The new accessory was featured and promoted in the 1989 movie “The Wizard”. Rad Racer was the ideal game for use with the new accessory and was used in the movie to demonstrate the Power Glove. Mattel sold 654,000 units in the first 6 weeks of its release. The success was quick but short lived as the accessory was criticized for its imprecise and difficult to use controls. The product was discontinued in 1990 after selling approximately 1.3 million units worldwide.

Gaming Historian - The story of the Power Glove 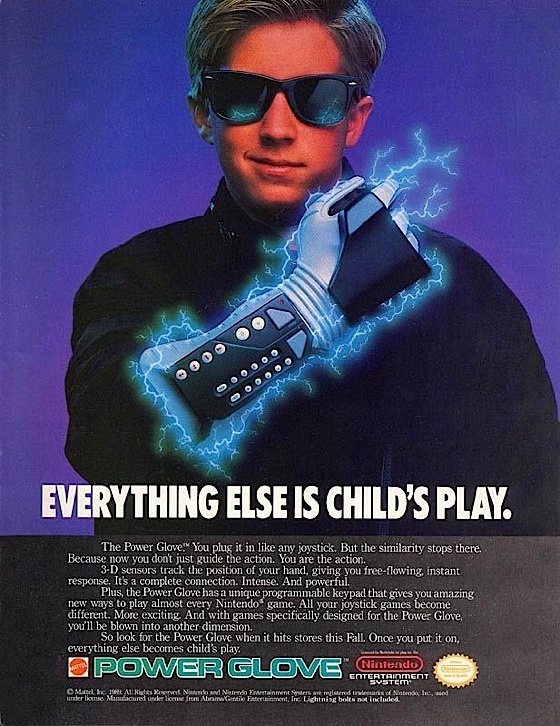