The Cathode-Ray Tube Amusement Device allowed players to control a CRT’s electron gun much like an Etch-A-Sketch proving the feasibility of controlling and manipulating a video signal on a display. The next major milestone in the course of creating the modern video game took place three years later in 1951 when Ferranti International first displayed their Nimrod computer at the Festival of Britain’s Exhibition of Science.

The Nimrod was the first digital computer exclusively designed to play a game though its true intention was to demonstrate the processing power of the new computing device. The device played the game of Nim, a two-player mathematical game of strategy in which players take turns removing objects from piles until the last object is obtained. Unlike the “Cathode-Ray Tube amusement Device” the Nimrod computer did not use a Cathode-Ray Tube display but used a set of fixed lights that turned on and off for a visual to describe what was happening throughout the gameplay.

The twelve-by-nine-by-five-foot computer was designed by John Makepeace Bennett and built by engineer Raymond Stuart-Williams. The computer allowed exhibition attendees to play a game of Nim against an artificial intelligence, a game mechanic that would be instrumental in the evolution of video games. 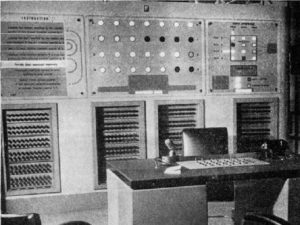 An overview of the Nimrod computer

Chad Jaksen YouTube channel explores the rich and fascinating history of video games, while examining and critiquing the current state of the video game industry.