Fairchild Channel F is a second-generation home video game console designed by Fairchild Semiconductor in conjunction with Alpex Computer Corporation. The system launched in November 1976 and was the first home console of the second generation. The Channel F introduced the interchangeable cartridge that contained ROM chips that could be plugged into the base unit, a first in the video game industry and was a monumental step forward for the industry.

By 1975 video games were an emerging new market and seemed to be the next logical step for Fairchild’s product line. Shawn Fogarty, a Fairchild parts rep was contacted by Norman Alpert asking him to visit his company Alpex Computer Corporation for a demonstration of a prototype they were working on. Alpex Computer Corporation created a prototype video game console which allowed consumers to switch games at will. The system was designed by Wallace Kirschner and Lawrense Haskel. Kirschner led the hardware design of the prototype console while Haskel handled the software and programming.

The prototype console known as the “RAVEN” for Remote Access Video Entertainment would allow interchangeable cartridges that contained their own software program embedded on chips within the cartridge opposed to being housed in the video game console. This was a new concept as all prior systems only contained video game information within the console hardware itself. Some systems offered an expandable form of gameplay by using removable cards which acted as a jumper that turned on and off certain electronics inside the console to alter the built-in games.

Fogarty was impressed with the prototype and brought it to the attention of Fairchild’s Vice President of Consumer Products, Greg Reyes. Also, very impressed with the prototype Reyes consulted Wilf Corrigan, CEO of Fairchild who assigned Gene Landrum and Jerry Lawson to evaluate the technology and write a feasibility report on the Alpex console from a marketing and business perspective. 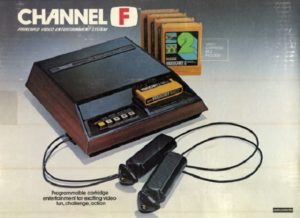 By 1975, Lawson had already extensively experimented with video games himself with the creation of his own arcade game. Knowing Lawson’s affinity for video games, Reyes decided that Lawson would be an appropriate engineer to spearhead a new video game project within Fairchild. Lawson was made led of a newly formed video game division of Fairchild which was kept secret within Fairchild during early development.

Lawson was not fond of the RAVEN’s keyboard control scheme, finding it awkward to use. He created a fairly complicated joystick that would function with the Hockey game that Haskel had already developed. The controller was the first digital home game joystick with prior systems offering knob like controllers.

With Lawson in charge of electronic engineering and software for the project, Nick Talesfore was made head of industrial design. The pair began work on miniaturizing Alpex’s unwieldy prototype into a size that would fit within an enclosure that could sit comfortably on an entertainment unit in a living room. While advancing further in the development process they realized that implementing the removal game media would be more complex than originally anticipated, requiring special expertise. Talesfore brought Ron Smith, a mechanical engineer onto the team to assist with the effort. Smith, Talesfore and Lawson refined the technology originally conceived by Kirschner and Haskel into a practical, commercial product.

In November 1976 the Fairchild Channel F was released and became the first video game console to have swappable game cartridges. This new feature allowed consumers to purchase a library of games and provided a new revenue stream for console manufactures. The Channel F console also featured a pause button, another first in a home video game console. The Channel F was not a commercially successful product, only selling 250,000 units however was a very important step forward for the video game industry. The cartridge approach was replicated by other console manufactures, popularized with the Atari VCS in 1977 and was the mainstream media for game consoles for decades. 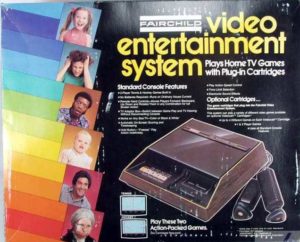 In 1979 Fairchild Camera and Instrument, including Fairchild Semiconductor was acquired by Schlumberger. Schlumberger an international oilfield service company was not interested in Fairchild’s video game division and promptly sold the Channel F division to Zircon International.

Zircon utilized revisions made to the console’s design by Fairchild prior to the acquisition to repackage and market the system as the Channel F System II. The revisions to the console hardware were mainly cosmetic with the system size being reduced and fine tuned. Along with the cosmetic changes the design team introduced removable controllers instead of them being hardwired directly into the console and the audio was fed into the RF adapter allowing for sound to be distributed from the television, removing the need to have a build in speaker. 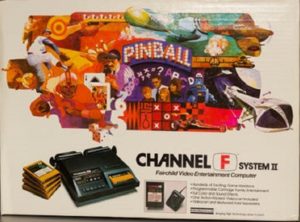 The Channel F was discontinued in 1983 ending the console’s life cycle with a total of twenty-six different video game cartridges being released for the system, however more than 26 games exist for the system. The console came with two pre-installed games, Hockey and Tennis and some of the cartridges were compilations containing up to four games.

From Alpex Project Raven to the Channel F System II

RetroManCave is a YouTube channel that explores retro games, systems and peripheral from the past. 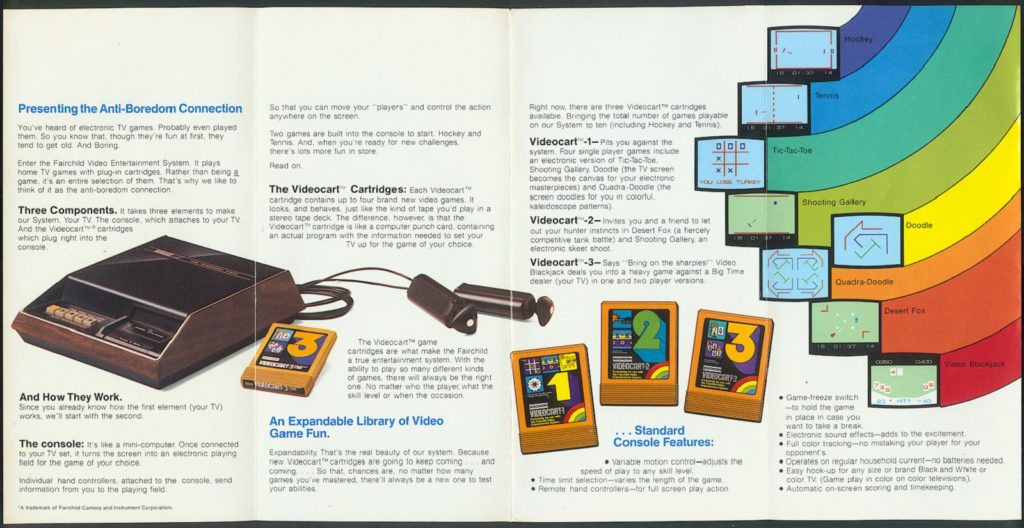