On January 25, 1947 Thomas T. Goldsmith, Jr. and Estle Ray Mann filed for a patent on a device called the “Cathode-Ray Tube Amusement Device” which was issued on December 14, 1948 thus making it the earliest-documented video game on record.

Goldsmith and Mann’s cathode-ray tube based game was inspired by the radar displays used in World War II. The “Cathode-Ray Tube Amusement Device” allows a player control of the CRT’s electron gun much like an Etch-A-Sketch. The beam from the gun is focused at a single point on the screen to form a dot representing a missile, and the player tries to control the dot to hit paper targets on the screen, with all hits detected mechanically. The device required players to use overlay pictures of targets such as airplanes in front of the screen with only the dot from the CRT’s electron gun being displayed on the screen.

There are a lot of people that view this as an electronic toy more than a video game but this is subjective and open for interpretation. Though this device did not use any computer hardware nor did it produce graphics through a video signal it did allow players to play a simple game that was displayed on the same CRT technology that was used in television sets thus marking the beginning of a new age of cathode-ray tube technology and what they could be used for. Up until this new device any type of display was simply used for viewing purposes but this device allowed changes to what was happening on the display, it was interactive. No matter if you view this as a video game or an electronic toy one thing is certain, it helped lay the foundation of what has become one of the largest and most profitable entertainment industry in the world. 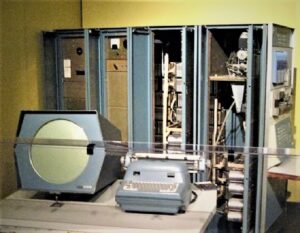 An Overview of the first interactive electronic game

HistoryPod is a YouTube channel that covers historical topics that take place on each day of the year.  The daily history podcast focuses on the creation of videos covering “on this day” in history.