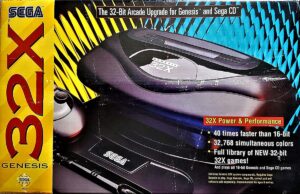 The 32X is an add-on hardware device for the Sega Genesis / Mega Drive video game console.  The add-on device was designed to expand the power of the Genesis and to extend the life span of the Genesis platform until the release of Sega’s next generation console the Sega Saturn.

Sega released the Mega Drive console in Japan in 1988 and the renamed Genesis in North America in 1989.  Sega in an attempt to stay one step ahead of their competition, mainly Nintendo at the time, released numerous add-on devices for their fourth-generation console.  Sega released their first add-on for the Mega Drive in 1991 when the Mega-CD launched in Japan.  The rebranded add-on device was released the following years in North America as the Sega CD and ultimately did not meet Sega’s commercial expectations.

Nintendo released their fourth-generation console, Super Famicom in Japan in 1990 and the Super Nintendo in North America in 1991.   Sega had a good 2-year head start in the fourth-generation and secured a large market share with the Genesis/Mega Drive before Nintendo released their competitive console with the Super Nintendo/Super Famicom.   With Nintendo beginning to gain ground after the launch of the Super Nintendo, Sega was looking for ways to extend the lifespan of the Genesis console by making it more powerful and bridge the gap until the release of the Sega Saturn. 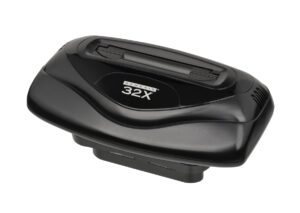 The decision to create the 32-bit add-on was made by Sega CEO Hayao Nakayama knowing that the Sega Saturn would not be readily available until 1995 and the uncertainty of how the upcoming 64-bit Atari Jaguar was going to preform in comparison with their 16-bit console.  Nakayama instructed the development team to have the add-on device ready for release by the end of 1994 as a quick response to the launch of the Atari Jaguar.  In January 1994 Nakayama contacted Joe Miller, the head of Sega of America’s Research and Development department to stress the importance of having a competing system on the market by the end of 1994.  The conversation quickly evolved into a conference calls with Sega Producer Scot Bayless, head of the Sega Hardware division Hideki Sato and Sega of America’s Vice President of Technology Marty Franz.

The team was very concerned with the feasibility of being able to design and manufacture a new hardware device with no previous design specification within a six to nine-month period.  The team began brainstorming ideas and one potential idea was to proceed with a concept that Sega of Japan was working on known as “Project Jupiter”.  Project Jupiter was intended to be an entirely new independent cartridge-based console that would be an upgraded version of the Genesis with an improved color palette and basic 3D capabilities with the use of the Sega Virtua Processor chip.

The development team had concerns with releasing an entire new independent console with the Sega Saturn already in development.  The team did not want to alienate their customers by releasing an independent console that would require customers to discard their Genesis/Mega Drive console entirely to play 32-bit games.  The team discussed the idea of leveraging the existing Genesis/Mega Drive hardware with additional hardware components added to the console to achieve the same technical advancements.   This approach would control the cost of the new system making it more cost efficient to manufacture and for existing Genesis/Mega Drive customers to purchase.  The decision was made to move forward with an add-on device resulting in the cancellation of “Project Jupiter” in favour of the new add-on device, codenamed “Project Mars”.

The new hardware device was unveiled by Sega in June 1994 at the Consumer Electronics Show as a low-cost option for consumers looking to play 32-bit games.  The system contained two 32-bit SuperH-2 central processing units and a 3D graphics processor which improved the performance capability of the Genesis/Mega Drive console.  Shortages of processors due to the same 32-bit chips being used in both the 32X and the Saturn hindered the development of the 32X and before the system launched the release date for the Saturn was announced for November 1994 in Japan.  This coincided with the 32X’s target release date in North America leaving Sega of America in the position where they had to market the 32X with the Saturn’s Japan release occurring simultaneously.  This left Sega of America in an awkward position where they needed to market the new add-on as a “transitional device” between the Genesis and the Saturn.

The system released on November 21, 1994 in North America for $159.99 with games retailing for $69.95.  The system was less than half the price of the Sega Saturn when it released the following year but despite the lower price tag, Sega had a difficult time convincing third-party developers to create games for the new hardware.   The system released in Japan on December 3, 1994 under the name Super 32X and in January 1995 throughout Europe using the name Mega Drive 32X.

The 32X failed to attract third-party video game developers and consumers because of the announcement of the Saturn’s simultaneous release in Japan. Sega’s efforts to rush the 32X to market resulted in a weak library of 40 games that did not fully utilize the capability of the hardware and included Genesis ports opposed to original developed games designed for the new hardware. Sega produced 800,000 units and sold an estimated 665,000 systems by the end of 1994, selling the rest at steep discounts until it was discontinued in 1996 as Sega turned its focus to the Saturn.

The story of the Sega 32X - Gaming Historian 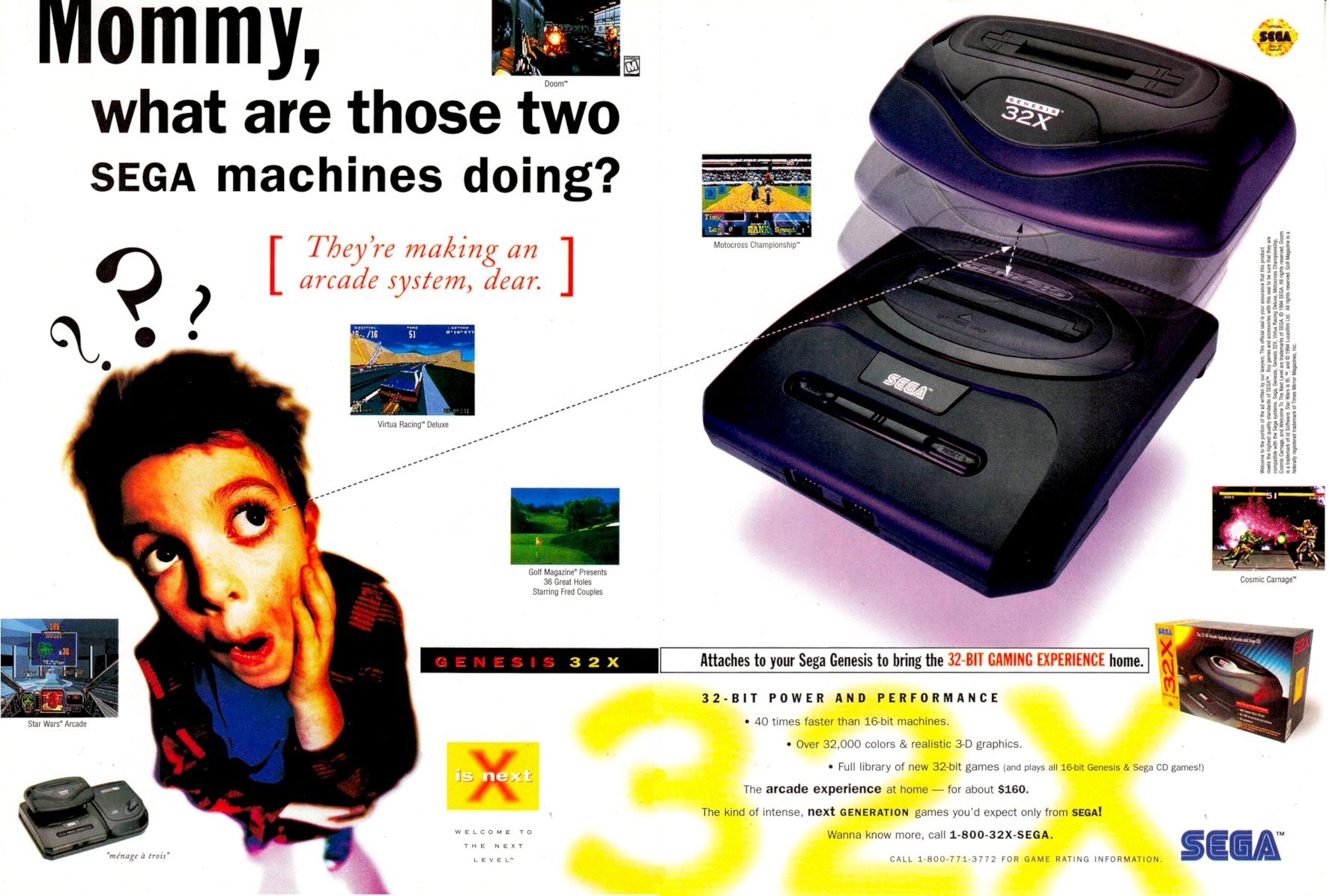