Featuring up to four teams that can be controlled by either the computer or human opponents, players aim to destroy the other teams on a generated terrain.  Teams are made up of four worms with each character having 100 hit points.  The worms die when their hit points reach zero and explode upon death, causing damage to any nearby soldiers.

The gameplay is turn-based where players take turns controlling one specific worm from their team to perform a strategic attack on an opponent.  Players are given a 60 second time limit to complete an attack on an opposing team.  Only a single attack can be made during each turn where a player can move one of their soldiers and choose a weapon for attack.  After attacking the player’s turn ends and their opponents get to respond.

There is a variety of weapons available for use such as a bazooka, grenades, fire punch, dynamite, and air strikes.   Weapon attacks are affected by wind and gravity which need to be accounted for and factored into the player’s approach.  Utilities such as rope and girders are available to assist the characters in crossing the battlefield’s terrain.  The worms can crawl left, right and jump however if the worm falls from a great height, they will lose health and the players turn ends immediately.  If the character falls into water or offscreen, the soldier dies.

The game offers ten styles of terrains ranging from forest and deserts to candy land and the moon.  The terrain in each round is affected by battle where explosions will create craters in the ground and tunnels can be formed.

The concept for the game was conceived by Andy Davidson, who began working on the project in 1990.  While attending high school he began experimenting with the idea of creating a simple game based on early 8-bit tank games using a Casio graphing calculator.  Davidson named the game Artillery and created it as a passion project to play with his friends.

Davidson began working at a local computer store that sold Amiga computers and decided to move development of Artillery to the Amiga in August 1993.   This allowed him to expand upon his initial concept and implement more complex features.  Inspired by Lemmings, Davidson wanted to achieve the same animation quality and humor which led him to the idea of using worms as characters.

After implementing worms as soldiers into the gameplay he decided to rename the game from Artillery to “Total Wormage”.  Davidson decided to enter his game into a programming competition held by Amiga Format magazine to raise awareness of the game by obtaining free publicity.  Total Wormage did not rank in the competitions top submissions and did not draw the attention that Davidson was hoping for.  Not being deterred by the outcome Davidson continue to refine his game and brought it to the European Computer Trade Show (ECTS) in London in September 1994 where he met Team17 co-founder Martyn Brown.

Davidson showcased his game to Team17 who showed interested in the game and asked if he would be interested in having the game published.  Davidson agreed to a deal with Team17 who began working on ports of the game to the PC, PlayStation and other consoles while Davidson continued to refine and finish the game on the Amiga.

The game was first released in Europe for the Amiga on November 17, 1995 and was published by Ocean Software.  Commercial ports of the game quickly followed for the PC, PlayStation and Game Boy.  The game quickly became popular and was an instant commercial success, selling over 250,000 copies by March 1996.   As the game continued to gain momentum additional ports were created for Sega Saturn, Mega Drive, Super Nintendo and Atari Jaguar.  Worms went on to sell over 5 million units across all of its various ports.  The success of the game spawned numerous sequels and spinoff titles turning Worms into a well-known franchise.

Interview with Andy Davidson, the creator of Worms 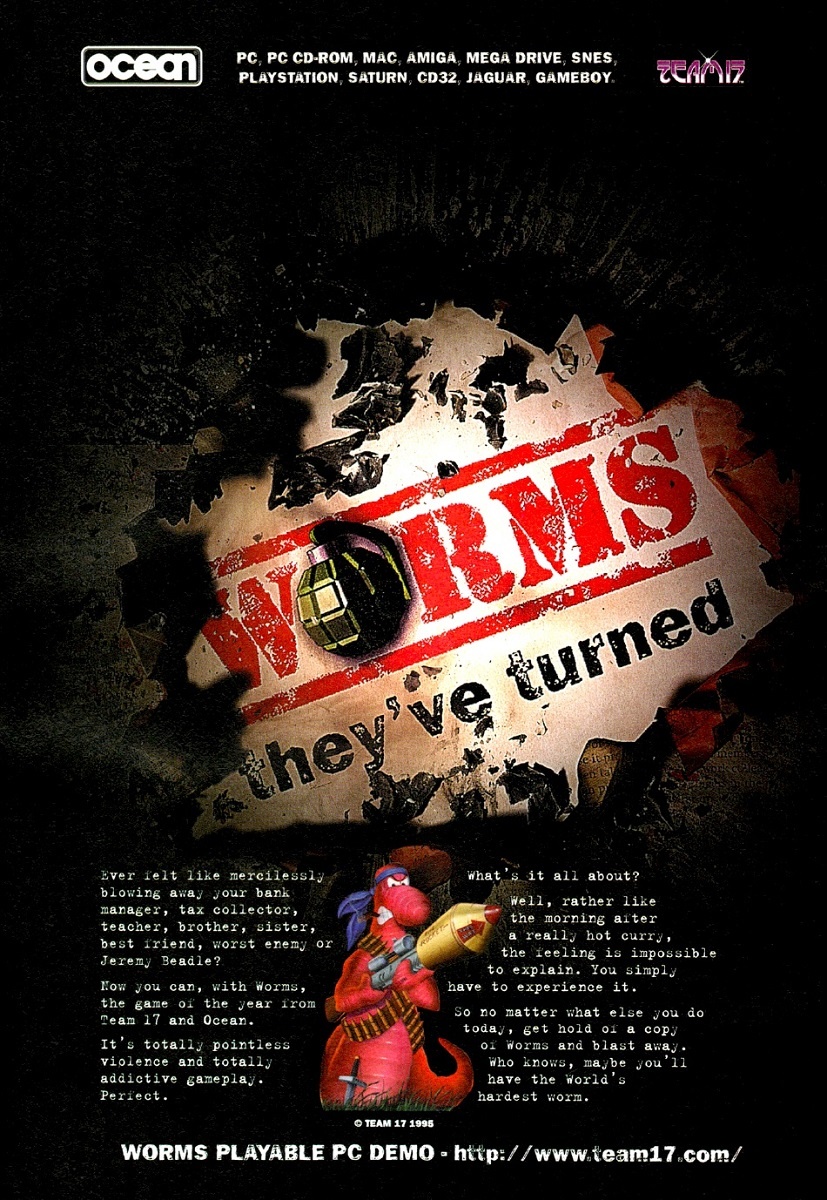