Wolfenstein 3D is a first-person shooter developed by id Software and published by Apogee Software.  Released as a shareware title for the PC on May 5, 1992 the game is the third installment in the Wolfenstein series.

The conception of the game can be traced back to November 1991 when john Romero suggested a 3D remake of the 1981 Castle Wolfenstein game.  Earlier in the year John Carmack began experimenting with 3D computer graphics, a technology what was quite new to the industry and at the time seemed to be only used in flight simulation games such as the 1990 release of Wing Commander.

In order to render 3D graphics a computer had to handle many more calculations in comparison to 2D based games.  The processing power of the computers at the time had difficulty displaying a fast-paced action game in 3D due to the number of surfaces that needed to be calculated.  Carmack felt that with the recent increases in computing power that it would be possible to develop an action-based game rendered using 3D graphics.

He experimented with limiting the possible surfaces the computer needed to display on screen by creating game levels with walls.  The walls were designed using a flat grid rather than using arbitrary shapes and angles.  Carmack also implemented an unconventional method of creating the displayed graphics through ray casting which only required the surfaces visible to the player to be calculated rather than the entire area surrounding the player.

Over the course of six weeks Carmack developed a rudimentary 3D game engine as a proof of concept that the development studio could use.  By the fall of 1991 he had largely completed the game engine and discovered that he could add texture mapping without sacrificing the engine’s speed or greatly increasing the systems requirements.  Carmack enhanced the engine and by November 1991 id Software was asked by publisher Apogee Software to develop a 3D action game.

The development studio wanted to create something vastly different from their past games and during a brainstorming session to determine their next title John Romero suggested recreating the 1981 Muse Software video game Castle Wolfenstein.  The development team was intrigued by the suggestion as they all had fond memories of the game and the maze-like shooter gameplay seemed to be a great fit for the 3D game engine that John Carmack created.  The development team decided to move forward with the proposal, however the team believed that they would be unable to use the Wolfenstein name due to trademark issues and began discussing possible alternative names to create a spiritual successor to Castle Wolfenstein.

The game concept was presented to Scott Miller, founder of Apogee Software who immediately approved backing the creation of the game guaranteeing the studio $100,000 to develop the game.  With a formal agreement in place the project officially began on December 15, 1991.  Romero composed the general storyline of the game placing players in the role of Allied spy William “B.J.” Blazkowicz.  Set during World War II players must escape from the Nazi German prison Castle Wolfenstein and carry out a series of crucial missions against the Nazis. 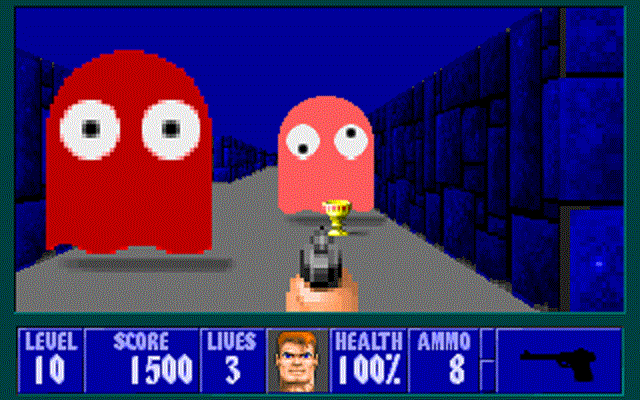 Romero wanted the goal of the game to revolve around mowing down Nazis while creating the suspense of storming a Nazi bunker full of SS soldiers and eventually hunting down Hitler.  Romero created the game’s narrative while Tom Hall designed the levels, and both collaborated to design the gameplay and aesthetics of the game. The sprites for the enemies and objects were hand drawn from eight different angels by Adrian Carmack using Electronic Arts’ Deluxe Paint II.  The grid-based level design took some inspiration from Pac-Man and the development team paid tribute to the arcade classic by incorporating a hidden Pac-Man level Easter Egg into the game.

While contemplating possible titles for the game the studio decided to contact Silas Warner the developer of Castle Wolfenstein to discuss the potential of using the Wolfenstein name.  They learnt that Muse Software and successor companies no longer existed and the trademark for the game had lapsed in 1986. Discovering who last held the copyrights for the game id Software was able to purchase the rights to the intellectual property in April 1992 for $5,000.

The game was initially intended to release using Apogee Software’s shareware model of splitting the game into three episodes and releasing the first for free, with ten levels per episode.  Scott Miller discovered that the development team were using Tile Editor to create the levels much quicker than he anticipated and convinced id Software to instead develop six episodes, which could be sold separately.  On May 5, 1992 the first episode of the shareware game was completed and uploaded by Apogee Software and id Software to bulletin board systems, with the other episodes releasing a few weeks later.

Id Software was able to complete the game within approximately six months with a budget of $25,000 which covered the development studios rent, $750 per month salaries, the $6,500 computer John Carmack used to develop the game engine and the $5,000 required to acquire the Wolfenstein copyright.  The original planned trilogy of episodes was made available as Wolfenstein 3D while the second trilogy of episodes the Miller convinced id Software to develop was released soon after as an add-on pack titled “The Nocturnal Missions”.  Gamers were able to purchase each trilogy separately or as a single game. 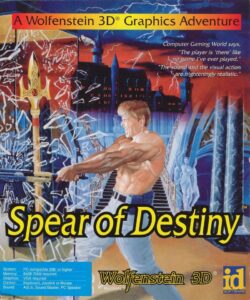 In addition to working with publisher Apogee Software to release Wolfenstein as a shareware title the studio also worked out an agreement with FormGen to publish a retail adaptation of the game.  Id Software created an additional episode, titled Spear of Destiny that follows Blazkowicz on a different prequel mission, trying to recapture the Spear of Destiny from the Nazis after it was stolen from Versailles. Spear of Destiny took two months to create and was published commercially by FormGen in September 1992.  FormGen later published two sequel episodes, “Return to Danger” and “Ultimate Challenge”, each of which feature Blazkowicz as he fights through another Nazi base to recover the Spear of Destiny after it has been stolen again as part of a plot to build a nuclear weapon or summon demons.

Upon release Wolfenstein 3-D was a critical and commercial success winning numerous awards and selling over 200,000 copies by the end of 1993.  The game is widely regarded as having helped popularize the first-person shooter genre and established the standards for the genre for the next decade.  The success of the game spawned the creation of a multitude of ports to home consoles.  Id Software’s reimagination of Castle Wolfenstein breathed new life into the franchise and made the series known by mainstream gamers.  Although id Software did not develop another Wolfenstein game, as their development focus shifted to Doom shortly after the game’s release and never returned to the series, multiple Wolfenstein titles have been produced by other companies.

The History of Wolfenstein - Gaming Historian 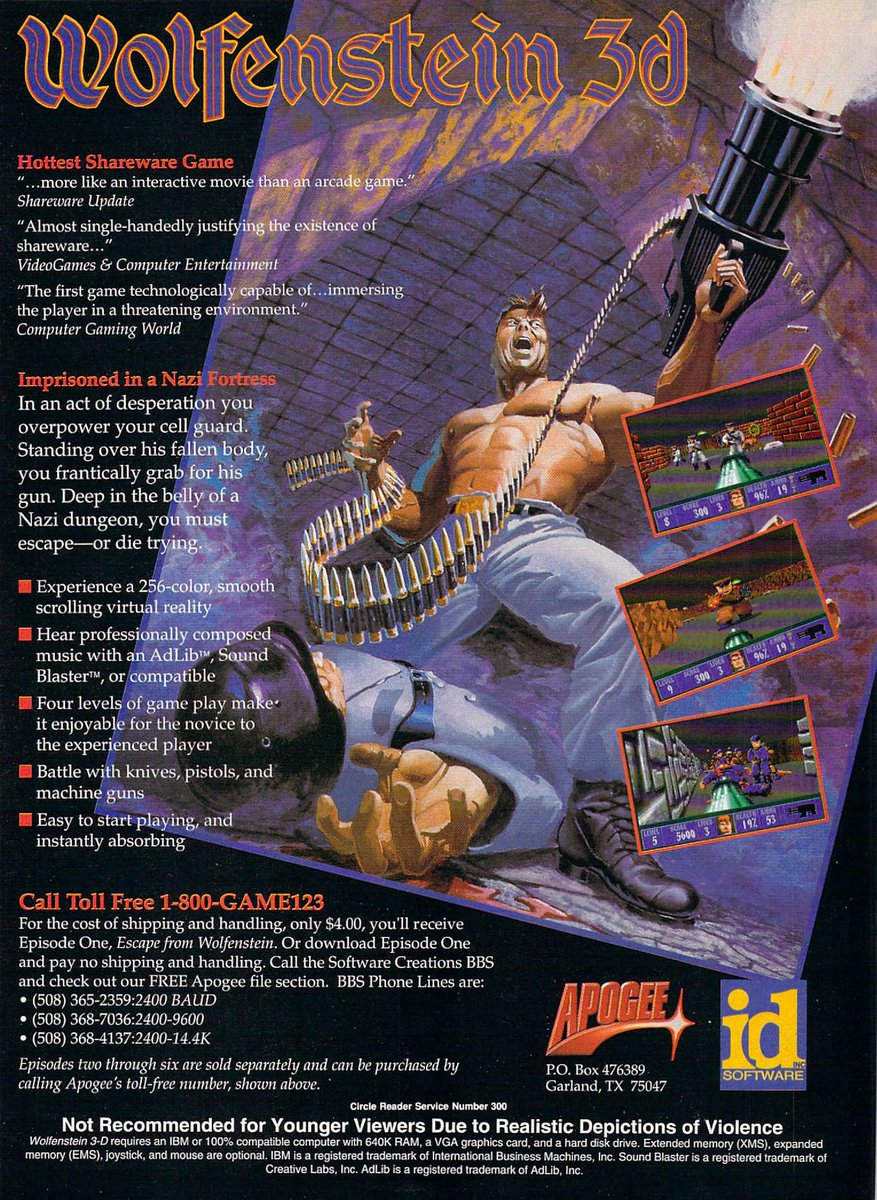