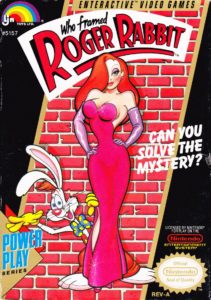 Who Framed Roger Rabbit is an action-adventure video game developed by Rare and published by LJN for the Nintendo Entertainment System.   Released in 1989, the game is based on the 1988 film of the same name and takes place in 1940’s Los Angeles.

Players take the role of the private detective Eddie Valiant who is hired by Roger Rabbit to prove his innocence.  Roger Rabbit was framed for the murder of Marvin Acme and joins Eddie Valiant on his investigation to find out the truth behind the murder.   Roger Rabbit’s wife, Jessica Rabbit was recently photographed with Marvin Acme and accused of having an affair with Marvin, giving Roger the motive to commit the crime.   The odds are stacked against Roger, but he is adamant that with Eddie’s help they can prove his innocence and get to the bottom of the crime.

After enlisting the help of Eddie Valliant, they discover that there is a mystery surrounding Marvin Acme’s last will and testament and with it, ownership of Toontown.   Together they must search through downtown Los Angeles, the city park, the warehouse district and Toontown looking for clues to get to the bottom of what happened and the truth behind Marvin’s murder.

Players must find all four pages of Marvin’s missing will to guarantee the future of Toontown while avoiding being captured by the weasels.  Along the way players have to collect the right weapons, accessories and clues which will lead Eddie and Roger to Judge Doom who must be defeated to save Toontown. 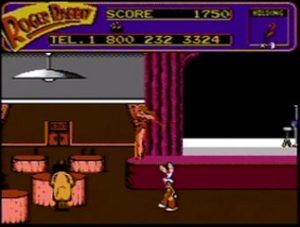 During the course of the game, players will come across Jessica Rabbit in the Ink & Paint Club.  When approached Jessica responds, “Find my phone number and give me a call”.  The telephone number 1-800-232-3324 can be found by searching the tables in the club.  At the time, calling the number in “real life” on an actual phone would have provided the player with a hint.  If dialed a voice recording of Jessica Rabbit would play, saying “It is shocking the way some neighborhoods are getting. You practically can’t walk anywhere without running into stray dogs, cats, and other animals. It makes you wish you carried a piece of meat, a fish bone, or a piece of cheese around with you. The weasel that is guarding Judge Doom’s warehouse is the one called Stupid. I’ve heard that the only thing that’ll get him to leave is a quick game of softball. Know any place where you could get a baseball in a hurry?”.  The recording is no longer available, and the number has since been reassigned.

Cygnus Destroyer is a YouTube channel that attempts to defend the worst games ever made and examines the celebrated classic games to see if they are truly worthy of the praise.