Skip to content
Home » Games » Where In The World Is Carmen Sandiego?

Where In The World Is Carmen Sandiego?

Where in the World is Carmen Sandiego? is an educational video game developed and published by Broderbund in 1985 for home computers.   The premise of the game places players in the role of a rookie detective in the ACME Detective Agency in an effort to find and capture Carmen Sandiego.

Villains’ International League of Evil (V.I.L.E.), a criminal organization led by Carmen Sandiego are stealing national monuments, artifacts and other world treasures.  Players must investigate areas, find clues, obtain a warrant and track down the thieves to arrest them.  As players successfully solve crimes and capture crooks, they are rewarded with promotions.   After players progress through the game, Carmen Sandiego herself will commit a crime, if players manage to successfully apprehend her, they will be promoted to master detective.

The game became the first installment in a long running series of Carmen Sandiego games which became immensely popular sparking the franchise to be adapted into a PBS game show that aired from 1991 to 1995.  The original concept of the game did not start out with the vision to be an educational game but rather evolved into one.  Dane Bigham a programmer at Broderbund was inspired by the 1977 text-based adventure game Colossal Cave Adventure and with the recent advancements in computer hardware believed that he could write an adventure game for children using the graphics capability of the Apple II computer.

Initial planning for the game began in 1983 when Bigham created a rough draft of his idea of a cops and robbers style game using the Apple II computer to provide menu-driven commands to replace the then common text commands found in adventure games.  Bigham solely developed the game to the point where it contained enough content to present to the broader Broderbund team as a proof of concept.

Bigham brought his proof of concept to the office of Gene Portwood and Lauren Elliott, also known as the Rubber Room.  Broderbund Software’s creative team would meet in the rubber room to bounce around ideas.  Further development of Bigham’s initial cops and robbers game concept started to evolve with the help of the broader team as they developed a more complete story and art for the game. 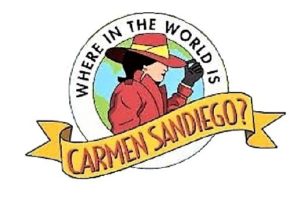 As Bigham, Portwood and Elliott continued to critique and refine the details of the game they were approached by Broderbund co-founder Gary Carlston with the suggestion to change the game from an adventure focused game to a geography focused game.  Carlston assigned David Siefkin to the project to help write the narrative around the Great Cities works from Time-Life books, but later directed him to use the World Almanac, as Carlston planned to ship the game bundled with the World Almanac.

Siefkin’s first draft named World Quest featured a demented wealthy professor named Professor Estaban Devious as the main villain.  He would steal treasures from small countries and hide them in his secret museum.  The draft script featured several other minor criminals, one of which was named Carmen Sandiego, named after the Brazilian singer and actress Carmen Miranda.  Broderbund project manager Katherine Bird was intrigued by the name believing it captured something exotic and mysterious.

Carlston also liked the name and the idea of having the lead villain a female character, allowing young girls to be able to connect with the game.  The name lent well to the title “Where In The World Is Carmen Sandiego”, as it clearly described the goal of the game.  The game was completed and release in 1985 for the Apple II computer, followed by a MS-DOS and Commodore 64 version shortly afterwards.

The game quickly became popular from an educational standpoint, becoming a core piece of software in many schools as a teaching aid.  Different revisions of the game were made throughout the 80’s and early 90’s with enhanced and deluxe versions released for home computers.  By 1991 more than 2 million copies of the game were sold, and the popularity of the game led to a PBS game show based off the concept of the game that ran from 1991 to 1995. 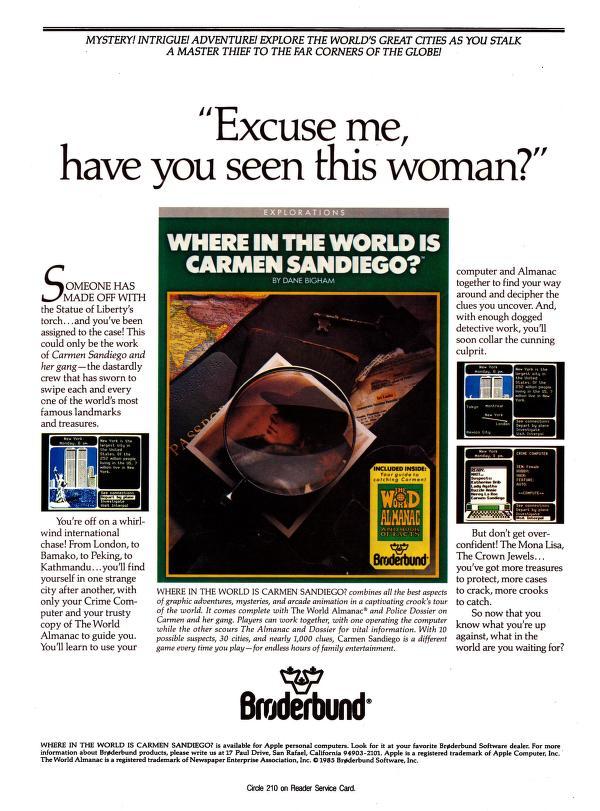