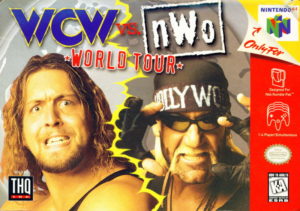 Released at the peak of the Monday Night Wars between the World Wrestling Federation’s (WWF) Monday Night Raw and World Championship Wrestling’s (WCW) Monday Nitro, World Tour became a huge success for THQ on the Nintendo platform.  Asmik Ace Entertainment and AKI developed a grappling system that was introduced in the game that was revolutionary.

The newly incorporated grappling system set the standard for wrestling games and separated the THQ wrestling games from their competitors.   The new gameplay mechanic was praised for its tight controls and ease of use in comparison to Acclaim’s WWF War Zone which had a much more convoluted control scheme.

The game features single, tag team, handicap and battle royal modes along with other match modes that were not featured in future sequels such as WCW versus nWo tournament, round-robin tournament and league tournaments.  World Tour lacked the features of more modern wrestling games such as create-a-wrestler mode, story mode, ring entrances and championship belts but built a solid foundation that could be expanded upon in future sequels.

The new grappling system laid the groundwork to a gameplay style that was universally seen as a superior approach for wrestling games.   THQ made this system a cornerstone of their wrestling franchise expanding upon it with every annual sequel, starting with WCW/nWo Revenge.   WCW/nWo Revenge would utilize the same game engine as World Tour but would add many new features such as ring entrances, improved graphics, additional arenas, more wrestling maneuvers, WCW championships and attire modifications.

The developer, Asmik Ace Entertainment self published the game in Japan and did not partner with THQ.  Released less than a month after the North American release of World Tour, the Japanese adaption of the game was released as “Virtual Pro Wrestling 64”.  The game still incorporated WCW wrestlers into its roster but also included generic renditions of wrestlers from major Japanese promotions such as New Japan Pro Wrestling and All Japan Pro Wrestling.  The game is a sequel to “Virtual Pro Wrestling” for the PlayStation which is the counterpart to the North America version “WCW vs. the World”.

WCW vs. nWo: World Tour proved to be one of THQ’s biggest hits becoming the second-best selling wrestling game for the Nintendo 64.  The game would reach sales over 1.3 million units in North America and went on to sale approximately 1.69 million units worldwide.

An in depth look at WCW vs nWo: World Tour with Nikateen Spotlight 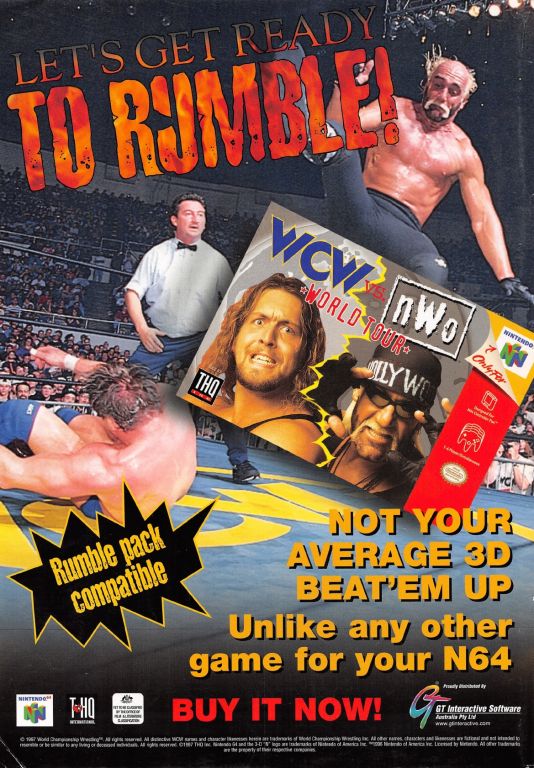