Twisted Metal is a vehicular combat video game developed by SingleTrac Entertainment Technologies and published by Sony Computer Entertainment for the PlayStation.  Released on November 5, 1995 in North America the game is the first installment in the Twisted Metal series.

The conception of the game began when Sony Computer Entertainment appointed David Jaffe of Sony Imagesoft to head the design of a game for Sony’s first home video game console, the PlayStation.    Jaffe along with fellow Sony Imagesoft employees Mike Giam and Alan Becker met with Evans & Sutherland, a commercial and military computer simulation firm that was contracted by Sony to create a game for the upcoming PlayStation console.  Initially the development team struggled to come up with an original concept for a game and ended up coming up with a concept after their brainstorming sessions while stuck in traffic.  The development team were inspired while being stuck in a traffic jam on Interstate 405, when they jokingly fantasized about using guns and missiles on the other vehicles to clear their way through the traffic.  They envisioned a Michael Bay style action movie going down the 405 freeway in L.A., with car combat scenes out of Mad Max.

The design team presented their idea for a vehicular combat game to the programmers at Evans & Sutherland who ended up modifying their idea into a pizza delivery simulation game.   The designers from Sony rejected their prototype and insisted on the more violent combat concept.  Employees from Evans & Sutherland joined the game designers to form SingleTrac Entertainment Technologies in the spring of 1994.   The newly formed studio was given a 12-month timeline and provided $2 million in advance royalties by Sony to develop two games for the PlayStation.

SingleTrac began working on two separate projects simultaneously, codename “Red Mercury” which became Warhawk and codename “Firestorm” which became Twisted Metal.  Before finalizing the game’s title, the development team considered various names including “Cars and Rockets”, High Octane and Urban Assault.  Initially the two games began as a single game which evolved into two separate games.   During the testing phase of the game players were able to fly the Warhawk ship around the first arena of Twisted Metal and fire weapons at the vehicles below.  In the beta version of the game the second and third stage of what was included in the final game of Twisted Metal was one large level.   The development team felt that the stage was too large for the limited number of enemies included in the level and were also experiencing several technical issues with the stage.  This prompted the team to split the level into two separate stages and the initial project was split into two concepts to develop separate games, Warhawk and Twisted Metal.

Both games were first shown at the first annual E3 in Los Angeles from May 11th to May 13th, 1995.  Both games were among the first PlayStation titles available in North America and were part of a large, multimedia advertising campaign by Sony for the console’s debut.  The final version of the game included 12 selectable vehicles and six levels ranging from underground arenas to the rooftops of Los Angeles skyscrapers.

The game was a commercial success for Sony when it launched in November 1995, generating over $28 million in revenue during it’s first year of release.  Sales continued to remain strong throughout 1996 reaching over one million units sold.   As a result, Sony announced on March 3, 1997 that the game would be re-released as part of its budget Greatest Hits selection of games. 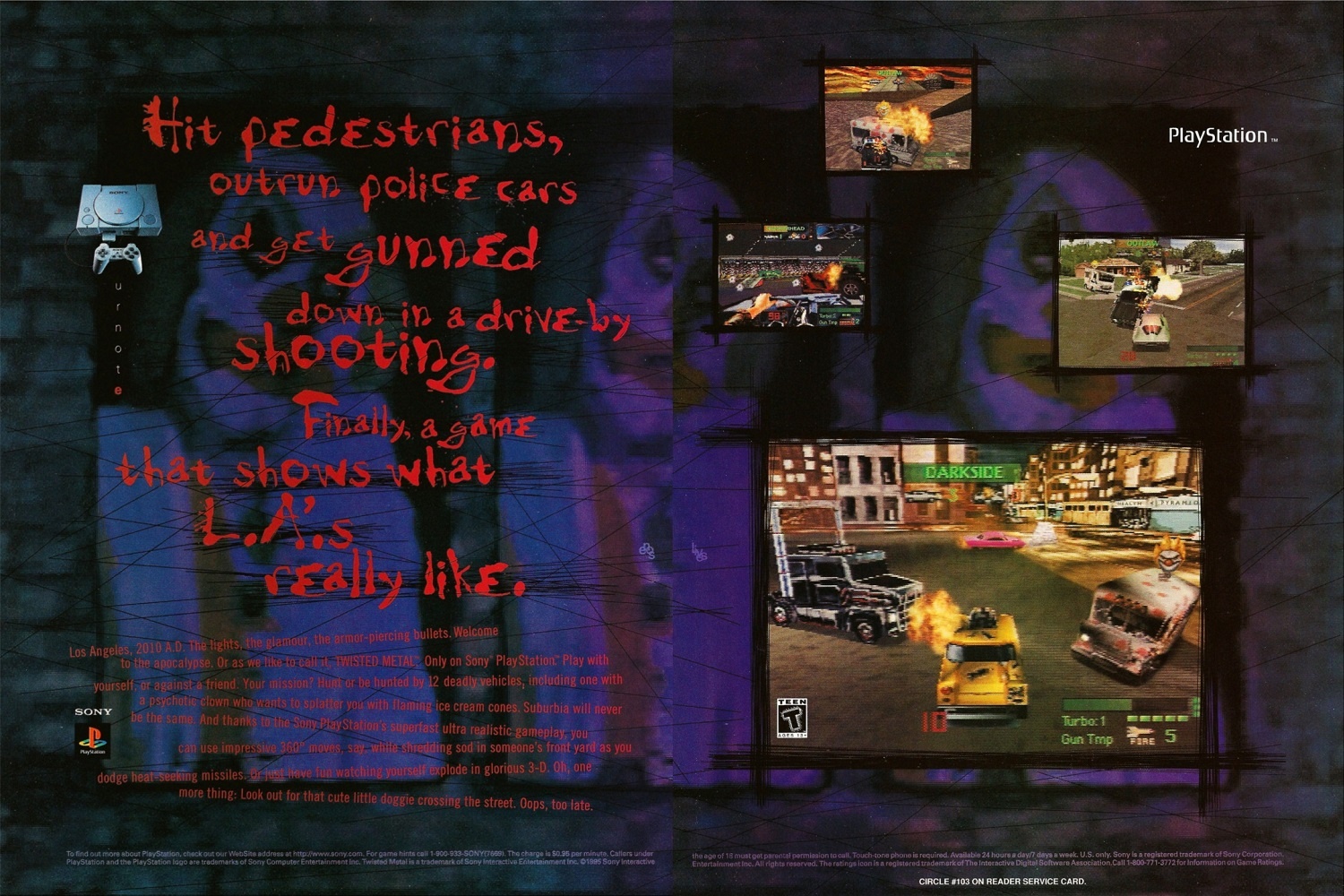