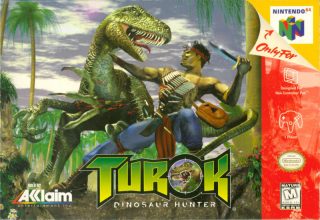 Turok: Dinosaur Hunter is a first-person shooter video game developed by Iguana Entertainment and published by Acclaim for the Nintendo 64.   The game was based on the 1992 revamp of the Turok comic book series by Valiant Comics.  In 1994 Acclaim Entertainment acquired Valiant Comics’ parent company Voyager Communications and began creating numerous games based on Valiant properties such as Shadow Man, Iron Man and Turok: Dinosaur Hunter.

The video game adaptation of the comic book places players in control of Tal’Set (Turok), a Native American time-traveling warrior.  The title and responsibilities of Turok is passed down every generation to the eldest male who is in charge of protecting the barrier between Earth and the Lost Land, a primitive world that is inhabited by dinosaurs.  Campaigner, an evil overlord is trying to obtain an ancient artifact known as the Chronoscepter which can be used as a powerful weapon.  Turok’s goal is to collect the eight pieces of the Chronoscepter and prevent the Campaigner from using it to wreak havoc on the universe.

Released in 1997, Turok was Acclaim’s first title to release on the Nintendo 64.  The release of Turok was part of Acclaim’s strategy to develop games internally and license merchandise with the use of the properties they acquired from the Voyager Communications acquisition, renaming Valiant Comics to Acclaim Comics.  Turok was announced in August 1994 as an exclusive for Nintendo’s next generation console that was in development, the Nintendo 64.  The game was slated to be a launch title for the Nintendo 64 but Iguana Entertainment was unable to complete the game in time for the console’s September 1996 release.   Iguana Entertainment required additional time to optimize the game to where it would fit on an 8-megabyte cartridge and address bugs that were found during testing.

By early 1997 Acclaim was facing financial difficulties sustaining losses of $222 million in their 1996 fiscal year end and lost a further $19 million by end of the first quart of 1997.  Acclaim was a major publisher in the 16-bit era however started to face challenges adapting to 3D based games for the next generation of consoles.  The publisher had a lot riding on the release of Turok in hopes to turn their financial woes around.  The game received an impressive amount of pre-orders and advance sales that Acclaim announced a sequel prior to the release of the game.

The game was highly praised by critics upon release and became one of the most popular Nintendo 64 games, selling over 1.5 million copies.  Acclaim followed through with their promise of a sequel, releasing Turok 2: Seeds of Evil for the Nintendo 64 in 1998.  In recent years a remastered version of the game was developed and published by Nightdrive Studios for the PC, Xbox One, Nintendo Switch and PlayStation 4. 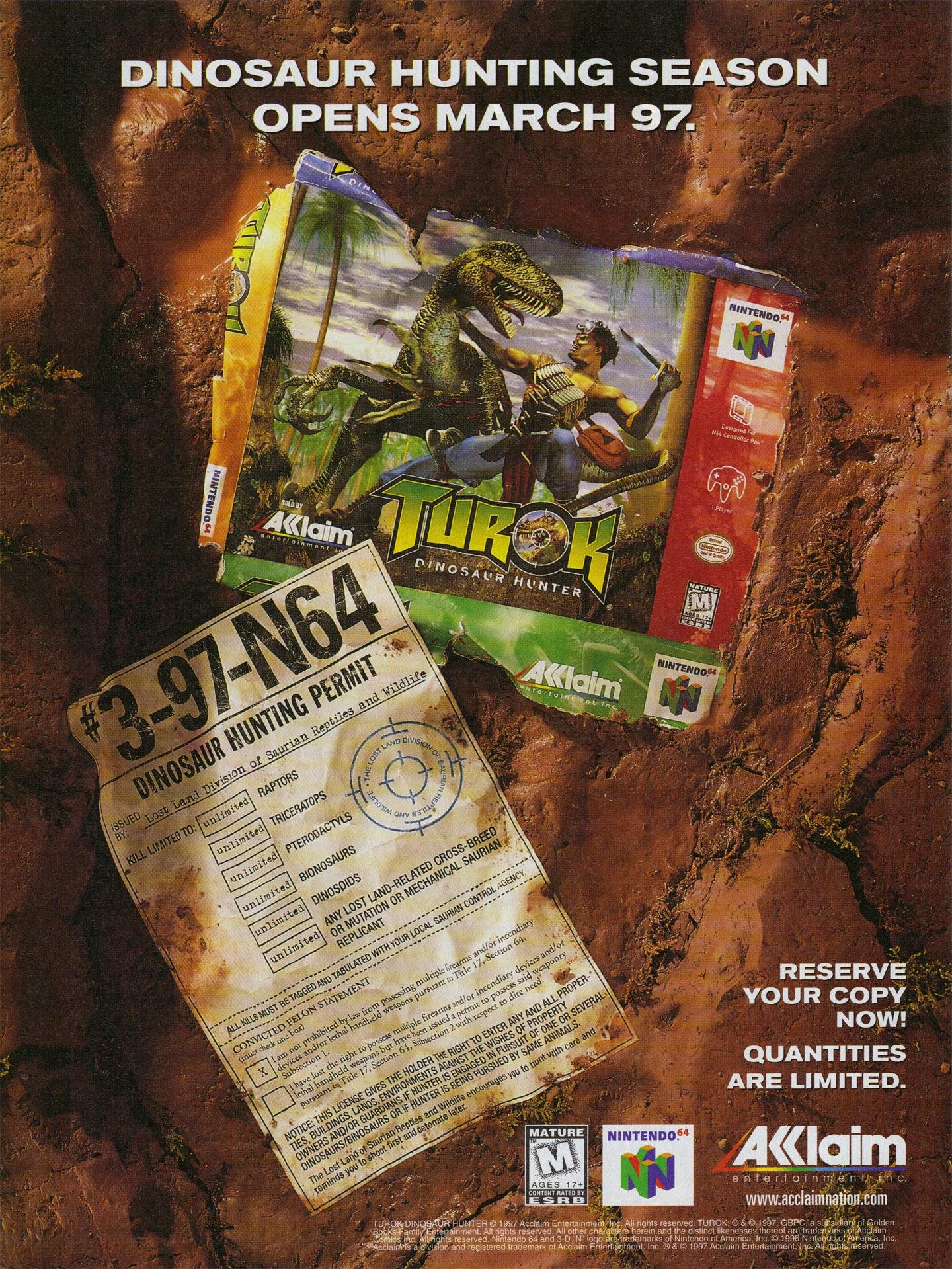