Like the original game in the series, Gremlin Interactive tailored the graphics and gameplay used in their PC racing series, Lotus.  Improving upon their previous racing games the development studio implemented a vehicle damage mechanism and a strategic upgrade mechanic that becomes integral to progress through the game.

As cars become damaged from collisions, they become more difficult to control and with opposing vehicles being faster than previous games players must take a different approach than what was required previously in the series.  Players are required to place in a top ten position in each race in order to qualify and advance to the next race.  Vehicles are equipped with 6 nitro boosts at the beginning of the game which dramatically increases the speed of the vehicle for a short period of time.  Players must manage the car’s fuel economy as racers are disqualified if a vehicle runs out of fuel.  With the elimination of pit stops found previously in the series, players are unable to refuel mid-race.  Upgrading the vehicle’s gearbox becomes essential in order to get the required fuel economy required to complete longer tracks found in the later portion of the game.

Pickups can be found spread across various courses allowing players to obtain additional nitro boost and money which can be used towards upgrading the player’s vehicle.  Using the money earned from racing upgrades can be purchased to improve the player’s vehicle.  Upgrading the car’s engine will allow the vehicle to accelerate faster and reach higher speeds.  Upgrading the nitro makes nitro boosts stronger, upgrading the gearbox increases the car’s top speed and improves the car’s fuel economy while upgrading armor allows the car to take more damage.  The addition of weather elements forces players to change from dry to wet tires to be competitive.  Upgrading can be made to the tires to improve the vehicle’s traction and turning performance.

The objective of the game is to become the fastest driver in the world by racing other drivers across 16 territories (Australasia, Britain, Canada, Egypt, France, Germany, Greece, India, Ireland, Italy, Japan, Scandinavia, South America, Spain, Switzerland and United States).  The game contains 64 tracks spanning the 16 territories, each of which contains four races.  Players earn points and money based on the position they finish each race which goes towards the territory’s overall ranking.  Players must be at the top of the territory’s leader board at the end of the four races in order to qualify to advance to the next territory.

A quick look at Top Gear 2 with Classic Game Room 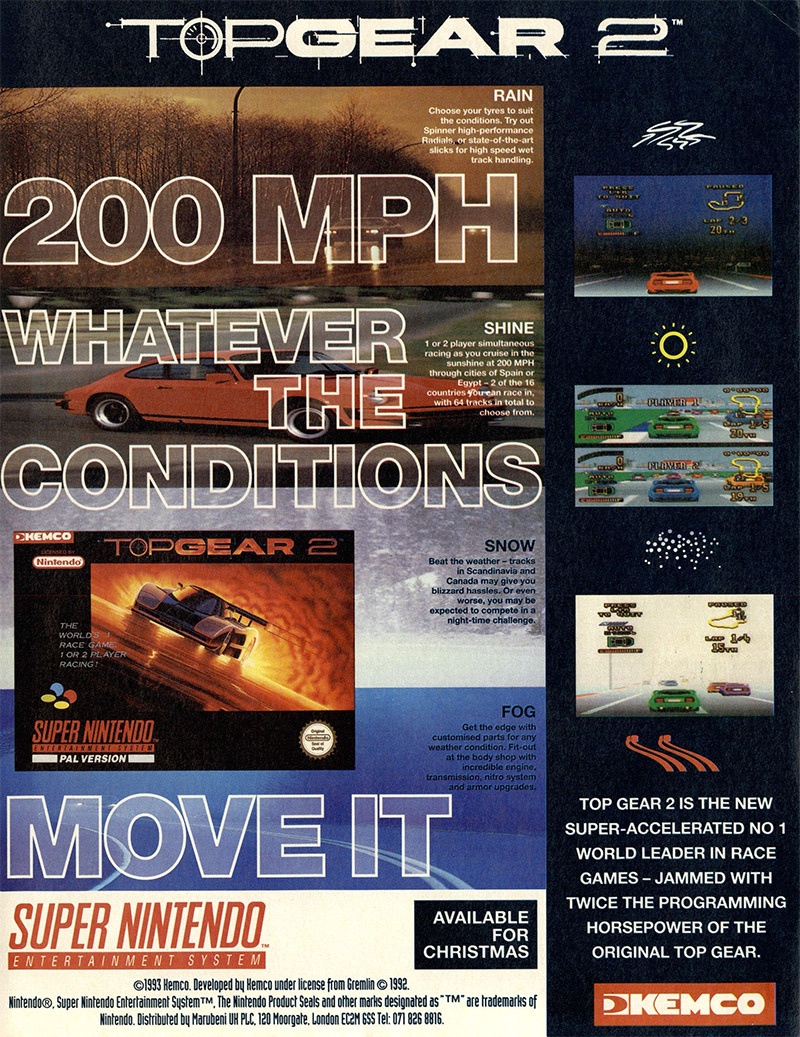