Skip to content
Home » Games » The Secret of Monkey Island

The Secret of Monkey Island

The Secret of Monkey Island is a graphic adventure video game developed and published by Lucasfilm Games.  The game follows a young man named Guybrush Threepwood who travels to Mêlée Island to become a pirate.  With his desire to become a pirate he seeks out the island’s pirate leader who tells him he must complete three trials to become a pirate.

The three trials entailed winning a sword duel against the island’s resident sword master, finding a buried treasure, and stealing a valuable idol from the governor’s mansion.   Players take control of Guybrush on his quests to complete the three trials.   As players explorer the island Guybrush learns of stories of the Ghost Pirate LeChuck.  It is said that LeChuck died in an expedition to the mysterious Monkey Island.  The journey was meant to win the love of the governor Elaine Marley.

As players work to complete the three tails Guybrush encounters the governor Elaine Marley and is instantly infatuated with her.  As the governor’s feelings towards Guybrush start to evolve the island is raided by LeChuck and his undead crew.  They abduct Elaine and retreat to their secret hideout on Monkey Island.  Guybrush’s quest quickly shifts from completing the three trials to finding a way to Monkey Island and rescuing Elaine.

The core concept of the game was conceived by Ron Gilbert in 1988.  He completed a draft of the story which involved pirates with unnamed villains that would eventually become LeChuck and Elaine, Guybrush was absent from the draft when he pitched his idea to Lucasfilm Games as a series of short stories.

The game’s ambiance was inspired by Gilbert’s favorite childhood amusement park ride, Pirate of the Caribbean.   While the game’s world was influenced by Pirates of the Caribbean the characters and tone were inspired by Tim Powers’ historical fantasy novel “On Stranger Tides”.   After reading “On Stranger Tides” Gilbert decided to add paranormal themes to the game’s plot and influenced the characters Guybrush and LeChuck. 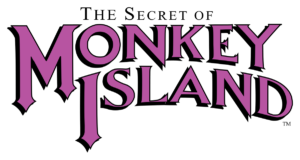 In order to flush out the story and characters, Gilbert brought Tim Schafer and Dave Grossman onto the project as writers.  Gilbert’s vision was for the story to have a comedic tone and felt that Schafer and Grossman’s personalities were perfect fit for the game.  As work began Gilbert discovered that although both Schafer and Grossman’s personalities were a perfect fit for the game their writing styles were vastly different and did not form a cohesive whole.    Grossman had a dry, sarcastic sense of humor while Schafer’s style was more in your face.

In order to effectively mesh both writing styles Gilbert assigned them to different characters and sections of the story depending on what type of comedy was more fitting.  Along with the creation of the story and characters Gilbert, Schafer and Grossman also handled the programming for the game.  Schafer and Grossman wrote most of the character dialogue while programming the game resulting in much of the content being improvised.

The game was designed using the SCUMM engine, originally developed for the creation of Maniac Mansion.   It was the fifth game to use the engine which was gradually modified by Lucasfilm Games since its creation.  Originally developers hard coded verb commands in the SCUMM scripting language, these commands would become more abstract in subsequent versions of the engine.  Alterations to the engine such as the addition of a dialogue tree that facilitated conversation options and the sword-fighting puzzles.  The game’s improved interface became the standard for future Lucasfilm Games titles. 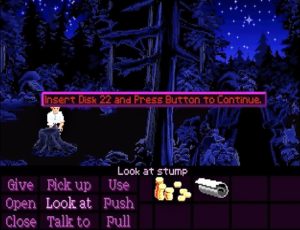 After nine months of development the game released on DOS in October 1990.  The original EGA version of the game released on eight 5.25” floppy disk and included a joke that referenced disk that did not exist which caused Lucasfilm Games some headaches.  When players examined a tree stump in the forest, Guybrush would exclaim that there is an opening to a system of catacombs then attempt to enter, resulting in a message stating that the player needed to insert disc 22, then 36, then 114 in order to continue.  The joke resulted in numerous calls to the Lucasfilm Games helpdesk with customers inquiring about missing disk.  As a result, the joke was removed from later editions including the VGA version which released in December of 1990 on four 3.5” floppy disk. 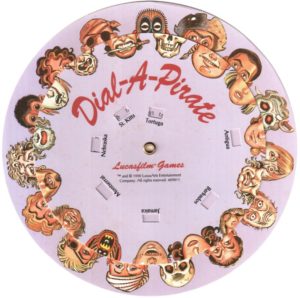 Due to how easy it was for consumers to be able to copy disk-based media the game came bundled with a cardboard wheel, dubbed “Dial-a-Pirate” as a form of copy-protection.   Player would be presented with a pirate on-screen during the start up of the game which they would have to match on the wheel to get the answer to a question.  After obtaining the answer by matching the pirate on the “Dial-a-Pirate” insert the player would enter it into the game to proceed with the start of the game.   If the question is answered incorrectly the game would not start.

The Secret of Monkey Island received positive reviews from critics upon launch and spawned four sequels, the first of which released the following year in 1991.  The game would receive numerous ports for various home computers such as the Amiga, Atari ST, FM Towns, etc. and eventually made its video game console debut on the Sega CD in 1993.  In 2009 LucasArts released a remake of the original entitled The Secret of Monkey Island: Special Edition for the Xbox 360 and PC.  The remake released the following year in 2010 for Macintosh and the PlayStation 3. 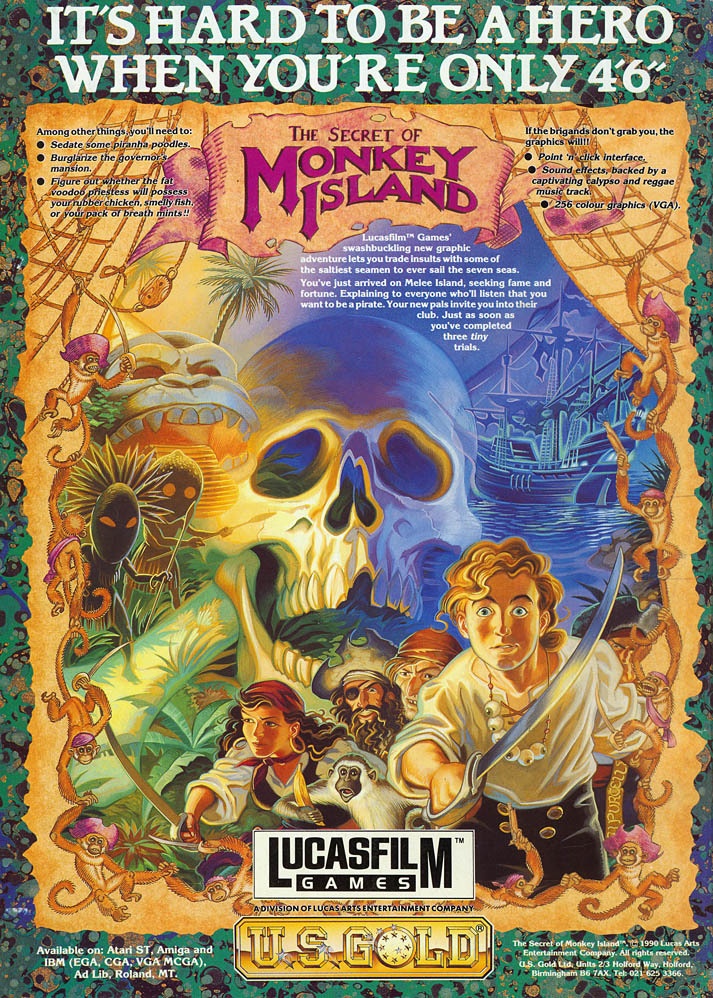