Super Monaco GP is a racing video game developed and published by Sega.   Designed as a Formula One racing simulation the game was originally developed for the arcade as a follow up to the 1979 arcade game Monaco GP.

The game was designed using the Sega X Board, the same arcade system board used in the 1987 arcade game after burner.  The arcade game was released in three different arcade cabinet styles, a standard upright, Cockpit and a deluxe version which implemented motion control with an air drive system.

The game centers around the Grand Prix of Monaco where players choose a transmission type before entering a qualifying race.  Players must complete a shortened track within a 45 second time limit in order to qualify for the Grand Prix.  If the qualifying lap is not successfully completed within the allotted time the game ends and if it is successfully completed the player’s completion time will be compared against the other drivers lap times to determine starting position for the Grand Prix of Monaco race.

Sega was able to achieve a smooth 60 frames-per-second from the use of the Sega X Board allowing for a very fluid racing experience.  The cabinets sported a 26” monitor and was one of the first games to feature a rear-view mirror view well driving.  The deluxe version included a Fresnel lens in front of the 26” monitor to make it appear much larger and was equipped with a unique Air Drive System that blew air into the cockpit to give the sensation of speed while a hydraulic system controlled the movement of the driver’s seat as players maneuver around corners.  The hydraulic system added realism to the game by simulating the sensation of impact when the race car hits objects or goes off track, the seat would move in different directions requiring players to maintain control while the cockpit physically moved and mimicked the G-force that would be felt by taking sharp corners at high speeds.

The combined features of the deluxe cabinet made Super Monaco GP one of the most realistic racing games of its time but due to the size required for the machine and its expense made it the rarest of the three models.   In addition to all the features found in the deluxe cabinet Sega implemented their “Power Link” feature which provided the ability to connect between two and eight cockpit cabinets or deluxe cabinets together allowing for a multiplayer experience.  The Power Link feature was enabled by connecting an optional cable to connect the systems together to provide a communication between the cabinets.  The ability to race against friends in a full-size cockpit arcade cabinet was an incredible new experience when the game released in 1989 and made the game quite popular.

After the game’s release it was noticed that Sega incorporated in game advertisements along the race trace to make the track as similar to the Monaco Grand Prix track as possible, this quickly became the subject of controversy.  Sega did not approach any companies to acquire licensing for the actual brands that normally would be seen around the Monaco Grand Prix track and instead chose to slightly modify the brands to separate the in-game advertisements from the real companies’ advertisements.  Some of the advertisements found around the track were “Fodo” which is assumed to be “Ford”, “Mobil 2” which is an obvious change from the real “Mobil 1” and “Conan” which is most likely an alteration of “Canon”.

None of the previous mentioned companies seem to take notice or cared about the inclusion of the modified advertisement however Philip Morris the makers of Marlboro cigarettes were not fond of the inclusion of their brand being used in the game without their permission.  Their brand was altered from “Marlboro” to “Malbobo” and they were not impressed with the parody.  The parody could be found all over the game as it was incorporated onto the race cars, billboards, banners and signs in the crowd, making it the most prominent of the modified advertisements.

On top of the makers of Marlboro cigarettes being upset with the use of the brand the inclusion of the advertisements drew the attention of others.  In December 1989, Dr. John Richards of the Medical College of Georgia filed a formal complaint with the Federal Trade Commission stating that “Super Monaco GP is essentially one big Marlboro ad”.  In the complaint he wrong “A child playing Super Monaco GP is exposed to literally hundreds of Marlboro ads during the game, if he’s good.  If he’s not good and doesn’t reach extended play, then he’ll see only 50 or so Marlboro ads”.

As a result of the incorporation of the modified Marlboro advertisement Sega found themselves in court.  Countering Philip Morris International’s complaint Sega claimed that their designers were attempting to create an authentic-looking environment and that none of Sega’s arcade or home games featured paid or intentional advertising.  Philip Morris was not satisfied with the response and had formally petitioned Sega in November 1989 to recall the game.  Sega would eventually agree to remove the advertisements from the game, but Philips Morris sued them for trademark infringement in February 1991 on grounds that game ROMs with the ads were still being found in arcades.

The lawsuit focused on the Marlboro brand still being included in the game even though Sega agreed in writing to remove all references of the brand from the game.  A settlement was reached between the two companies in May 1992 when Sega agreed to run three months worth of advertisements in the coin-op journals “RePlay” and “Play Meter” to inform arcade owners that free conversion kits would be made available to them along with $200 if they returned the original game ROMs so that the Marlboro advertisements could be removed.  The conversion kits contained material to replace the game’s original decals and replacement ROMs with new programming that had all advertisements replaced.

Super Monaco GP was very successful when it released in arcades in 1989 resulting in Sega soon porting it to their home consoles along with a few other consoles that were not manufactured by Sega.  The Genesis / Mega Drive version of the game added a World Championship mode.  The goal of the World Championship mode is to win a season of races and go on to defend the title.  The circuits are modeled after the one that were used in the 1989 Formula One season, with the background scenery similar to the real-world circuit venues.

The game would receive additional ports for the Master System, Game Gear, Commodore 64, ZX Spectrum to name a few however none would be as well received or as popular as the Genesis / Mega Drive version. 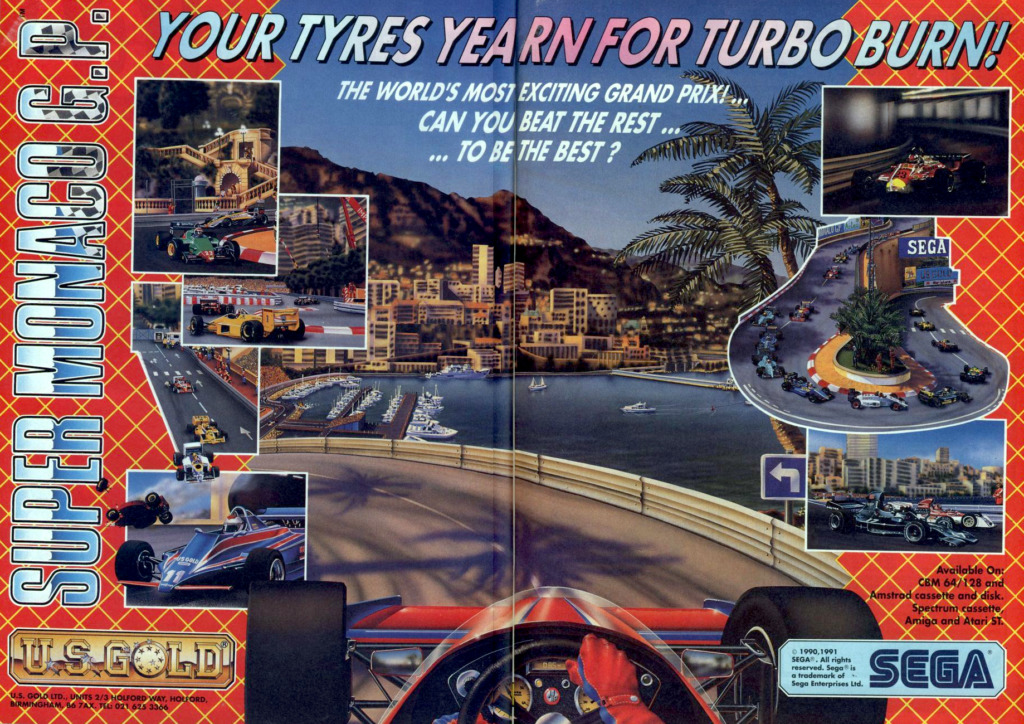 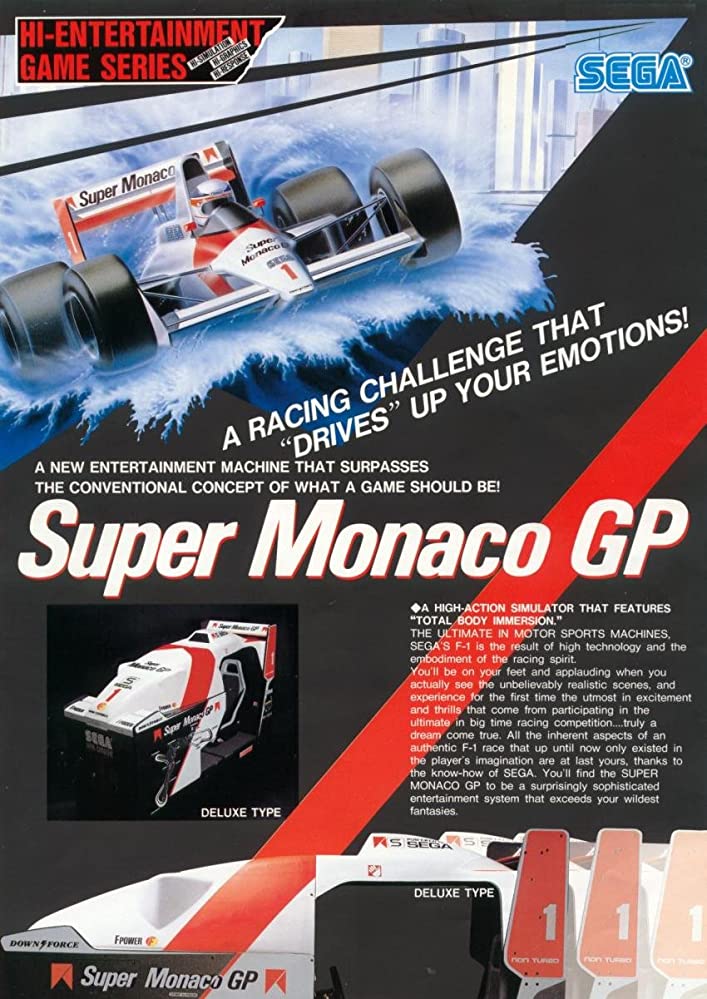