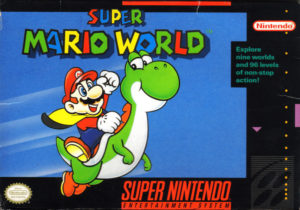 The game was developed by EAD, directed by Takashi Tezuka, produced by Shigeru Miyamoto and music composed by Koji Kondo. Much of the elements that debuted in Super Mario Bros. 3 were retained in the game such as the world map and Koopaling boss fights. The development team expanded on the ideas that were implemented in Super Mario Bros. 3 by introducing a large variety of new gameplay mechanics and adding the ability to save game progress. The game also introduced Yoshi into the Super Mario series and serves as a playable character in which Mario can mount providing a different unique abilities and gameplay style.

Development started in 1987 before the release of the North American version of Super Mario Bros. 2. Even though the game was in development for 3 years, Miaymoto felt that it was rushed near the end in order to release with the launch of the Super Famicom/Super Nintendo. Super Mario World was to be a console defining video game and was required at launch to compete with Sega’s 16-bit console the Mega Drive/Genesis which had a two-year head start on the market.

The game became a commercial success selling over 20 million units over its lifecycle. It introduced Yoshi who stared in the sequel Super Mario World 2: Yoshi’s Island and ultimately went on to star in his own series of games. It also inspired a short-lived animated television series of the same name, consisting of thirteen episodes, airing on NBC from September to December 1991.